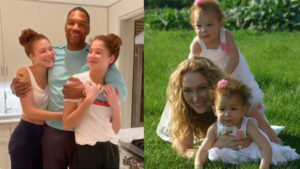 Former NFL star Michael Strahan is one of the privileged few who have turned their post-career retirement into a successful television hosting career. The Hall of Famer has largely avoided the rumor mills since his heyday, with the focus being on his new career – but now his ex-wife is threatening to tarnish that image with some new demands.

When the pandemic hit, Strahan’s TV morning talk show, Strahan, Sara and Keke, was pulled from the air in favor of a daily pandemic report by ABC News called Pandemic: What You Need to Know. Though the show won’t be returning, it had just achieved nominations for 3 Daytime Emmys. He still maintains his most successful gig to date, however, as one of the co-hosts of Good Morning America.

Strahan is just one of the many people dealing with divorce and money woes during the pandemic. Recent headlines have producer Dr. Dre facing similar demands from his soon-to-be-ex-wife, with some similar eye-staggering amounts. While Dre’s kids with his wife are grown and out of the house, the same cannot be said for Strahan – who still shares two twin daughters with his former partner.

Recently, Nicole Young hit the presses because of an eye-staggering amount of support that she was seeking, to the tune of over $2 million dollars.

She laid out in detail in recent court papers why she needed $2 million a month from Dre, including but not limited to $10K for cleaning and laundry, $135K for clothes, and over $900K for entertainment. TMZ is reporting all told, the actual amount is $2.53 million dollars – and she wants him to cover her attorney fees to the tune of $5 million dollars.

Strahan’s divorce was completed back in 2006, with the judge awarding his ex-wife Jean Muggli Strahan with a settlement of over $15 million dollars and over $18,000/monthly in child support for their two twin daughters, which was reduced to under $13,000/month in 2009. Now, she claims that he owes tons of back support – for their daughter’s horseback riding lessons, which she claims they were supposed to be sharing and splitting down the middle.

Daughters Sophia and Isabella seem to be avid, bourgeoning jockeys, as their mother claims in new court documents that the amount of back money that Strahan owes for his share of their riding lessons, which totals to almost $500,000, and has been collecting dust since 2017. His share that she’s seeking is approximately $225,000.

Also, she claims that he ows back child support, having underpaid since 2010 because they’d previously negotiated a cost-of-living increase, which hasn’t been honored since then. That adjusted amount which he owes rings in at a staggering $321,654 – an amount which Strahan is of course, disputing.

For his part, Strahan says that while he did agree to a cost-of-living increase, he believes that the language about how to come up with the number are “vague and indefinite,” and also that he never agreed to pay for their horseback riding lessons.

All told, Muggli Strahan is seeking almost $550K in monies from Strahan.