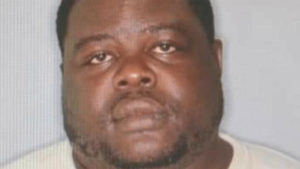 Two men scheduled for sentencing on Friday will have to wait a few more months to know their fate.

Police Constable Delroy Stapleton was in November convicted of unlawful wounding and discharging a firearm in a public place for a June 2016 shooting at the Frigate Bay Strip.

Timoy Henry, a young athlete and father was reportedly among many patron bystanders when he struck in the neck by a bullet when the off-duty officer discharged his weapon while breaking up a fight. He had to undergo multiple surgeries to restore the use of his arm as the bullet had exited through his shoulder.

High Court Judge Justice Patrick Thompson Jr, who is presiding in this jurisdiction until March has adjourned sentencing until April as the court awaits a Social Inquiry report requested by trial judge Justice Trevor Warde QC.

Stapleton remains on remand at Her Majesty’s Prison.

Fifty-five-year-old Clive Edwards of Taylors Village also returned to Her Majesty’s Prison as his sentencing was adjourned until April.

Edwards was found guilty of murder by unanimous verdict in March, 2017. He was convicted for the chopping death of 54-year-old Ashton Christopher, also of Taylors Village.