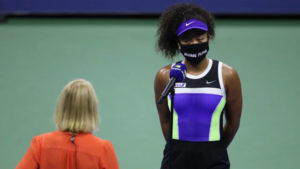 An ESPN analyst is facing backlash for a bizarre interview with Naomi Osaka following her victory in the 2020 US Open women’s quarterfinals.

The tournament’s No. 4 seed had just defeated unseeded American Shelby Rodgers 6-3, 6-4, and was answering questions from former Australian tennis great Rennae Stubbs while wearing a black mask with George Floyd’s name on it.

“I’ve been trying to guess what name is going to be on the mask every single day. I was wrong about today,” 49-year-old Stubbs asked on ESPN’s broadcast of the tournament on Tuesday. “Are you going to give us a foretelling of who’s going to be in the next match?”

Some considered Stubbs’ line of questioning strange and that her tone felt uncomfortably misplaced given the gravity of police brutality, which isn’t just a fashion statement for Osaka. Police officer Derek Chauvin was arrested for the killing of Floyd in Minneapolis after video surfaced of him kneeling on Floyd’s neck during an arrest in May. The death was a catalyst for months-long protests across the country in support of the Black Lives Matter movement.

“No, honestly I surprise myself sometimes. I think I’m going to choose this but, no,” the 22-year-old Japanese tennis star said. “For me, it’s just — I don’t know — it’s whatever I feel. I don’t know, it’s like a feeling I have inside.”

Osaka initially pulled out of her semifinal match in the Western & Southern Open as the rest of the sports world shut down following a video of the police shooting Jacob Blake in Kenosha, Wisconsin. Tournament organizers scrambled to cancel the entire day of play and convinced Osaka, who was in the semifinals, to play out the event.

Osaka has already displayed the names of Breonna Taylor, Elijah McClain, Ahmaud Arbery and Trayvon Martin — all of whom were either killed by police or victims of racially motivated crimes — on her masks while entering and exiting the court. She has seven masks in total that she plans to wear for each round of the tournament to raise awareness of social justice issues.

“Okay, well, we can’t wait for that feeling and for that next mask!” Stubbs replied.

The Aussie was promptly met with outrage on social media over her callous, “guess what name” comment, with some calling her actions “insensitive” and “appalling.”

Stubbs defended the interview and stated that she “meant well.”

“Of course i meant well, the parents of these victims are so thankful that Naomi is doing this,” she wrote on Twitter on Tuesday. “We even have them on video talking about it. I think the victims would love to know we are NOT FORGETTING THIER NAMES! I would never disparage them! If u know me u [sic] would know that.”

After the match, Osaka — who is of Haitian and Japanese descent — spoke of the significance of her statement and how emotional the process has been for her.

“Actually, I was just trying really hard not to cry,” she said during the post-match press conference. “For me, it’s a bit surreal and it’s extremely touching that they would feel touched by what I’m doing. I feel like what I’m doing is nothing. It’s a speck of what I could be doing. So it was really emotional. I feel like after I saw it, at first I was a bit in shock, but now that I’m here and I took some time, I’m really grateful and really humbled.”

Osaka won the US Open title in 2018 and hopes to earn her third Grand Slam Championship at this event. She is set to face off against No. 28 seed Jennifer Brady from the United States on Thursday in the women’s semifinals.