England’s Kane trains ahead of World Cup match against USA 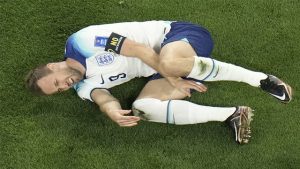 England captain Harry Kane trained Wednesday and could be recovered from his ankle injury to play against the United States in the World Cup.

Kane was injured Monday in England’s 6-2 win over Iran.

“I think he’s good,” said England goalkeeper Jordan Pickford. “He will probably be a little bit sore, but I think he’s fine. He’s out on the grass with us today and that’s good. He’s our captain and he’s fine.”

His recovery will be a relief to coach Gareth Southgate and England fans ahead of Friday’s match against the Americans.

Team doctors were concerned about the extent of the damage sustained by Kane and ordered scans on his right ankle. Kane won the Golden Boot at the 2018 World Cup as the tournament’s leading goal scorer.

“Harry is an unbelievable player, he sets the example in the squad, he’s a leader,” said Pickford. “He’s the captain and we all look up to him.”