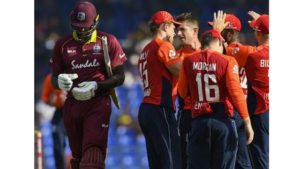 Jason Holder (L) of West Indies walks off the field dismissed by Joe Denly (3L) of England during the 3rd and final T20I between West Indies and England at Warner Park, Basseterre, Saint Kitts and Nevis, on March 10, 2019.

BASSETERRE, Saint Kitts and Nevis (AFP) — England defeated the West Indies by eight wickets in the third and final match to sweep the T20 International series 3-0 on Sunday with 57 balls to spare.

West Indies were dismissed for just 71, just two days after being dismantled for 45, the second lowest-ever total in a T20 international before England cantered to victory with Jonny Bairstow making 37.