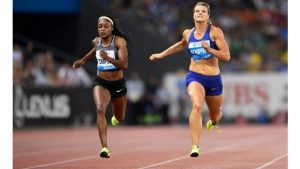 Dutch world champion Dafne Schippers, who won silver behind Thompson at the Rio Games, had an electric start from lane five, up quickly on the Jamaican over the opening 50 metres.

Coming into the home stretch, it looked as if Schippers had the victory in the bag, but she pulled up with 10m to run and dipped too early, allowing a strong-finishing Thompson into first in a Diamond League record of 21.85 seconds.

Schippers was second, just one-hundredth of a second adrift.

In one of the most stellar fields ever assembled over the women’s 200m, American Allyson Felix, who won 200m gold at the 2012 London Games and is also a three-time world champion in the distance, was third in 22.02sec.

European champion and Olympic bronze medallist Dina Asher-Smith of Britain was fourth in 22.38sec, while Jamaican Veronica Campbell-Brown, Olympic champion in 2004 and 2008, had to be happy with sixth behind compatriot and relay specialist Simone Facey.

Between Thompson, Schippers, Felix, and Campbell-Brown, the quartet have dominated the women’s 200m since 2004, reaping seven of the 12 available medals in the last four Olympics and 10 of the 18 in six world championships over the same period, including nine individual 200m golds.