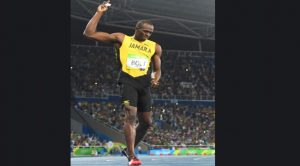 The victory in his favoured event was Bolt’s 13th individual world or Olympic sprint title from a possible 14 since he took athletics by storm at the 2008 Beijing Olympics.

As Guns N’ Roses’ Welcome to the Jungle blasted out, huge cheers greeted Bolt, wearing black lycra shorts and a singlet in the green, gold and black colours of Jamaica.
The sell-out Olympic Stadium crowd, which has been criticised for its jeering of some athletes, was raucous in its welcome of the Jamaican star.

The win means that Bolt can complete a third-straight sweep of the sprint medals — 100m, 200m and relay — today in the 4x100m contest when Jamaica start as favourites. The so-called ‘triple triple’ would see him leave the Olympic stage as an undisputed great.

Bolt, in his favoured lane six, had LaShawn Merritt, the American 400m specialist and sole US medal hope after Justin Gatlin failed to make the eight-man final, just inside him in yesterday’s final.

Immediately out of the blocks, the Jamaican was quickly up on Lemaitre, racing in seven. With the temperature around 27 degrees Celsius (84Â° F) and the track shining after a light shower of rain, Bolt delivered electrifying control around the bend, hitting the back stretch at full tilt.

As the crowd roared, Bolt responded by moving into his famed “drive phase”, head coming slowly up as part of the process that unleashes the full power from his long legs. Eyes glued on the stadium’s big screen at the end of the 100m track, Bolt blasted through the line with a glance leftwards at the giant stopwatch, beating his chest and saying “number one”.

There had been no easing up, but Bolt looked to be left disappointed with his time, ripping the numbers off his shorts and throwing them to the floor. “No, I can’t grasp what I’ve achieved, definitely not,” said Bolt.

“You work so hard for years and then you just hope it pays off. It is a brilliant feeling.” Bolt admitted that he hadn’t felt great down the back stretch, timing what was the slowest 200m of all his individual victories.

“I wasn’t happy with the time,” he acknowledged. “My body just wouldn’t respond in the straight. “I’m getting older and my body is ageing. Personally I think this is my last 200, but my coach may beg to differ.”

Any disappointment was quickly forgotten on the track as Guns N’ Roses was switched for Bob Marley’s One Love. Bolt, draped in Brazilian and Jamaican flags, did a lap of honour to chants of “Usain Bolt, Usain Bolt!” after another amazing victory and eighth Olympic gold.