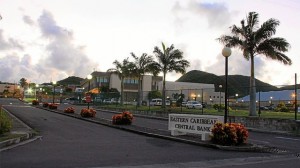 BASSETERRE, ST. KITTS, NOVEMBER 4TH 2014 (CUOPM) – The fiscal and debt positions of the governments of the Eastern Caribbean Currency Union (ECCU) is estimated to have improved for the year to September 2014 with declines in the primary and overall deficits of EC$71.8million and EC$17.8 million.

A report to 80th Meeting of the Monetary Council of the Eastern Caribbean Central Bank (ECCB) from Governor Sir K. Dwight Venner, on Monetary and Credit Conditions was based on developments during the year to September 2014, evaluated against outcomes during the comparative period of 2013.

“Improvement in the reserve position of the ECCB during the twelve (12) months to September 2014 contributed to an improvement in money and credit conditions in the ECCU,” said the communiqué issued at the end of the meeting last Friday.

It said the near term outlook and prospects indicated that external factors, including the performance of ECCU major trading partners, were expected to improve in the near term and that was expected to provide support for an easing in money and credit conditions which would in turn contribute to an expansion in economic activity.

“Council discussed the economic conditions in the ECCU member countries and the role of commercial banks in the growth and development thrust. Council expressed concern with regard to commercial bank charges and indicated that some action needed to be taken to address this matter. Council also agreed that a concerted approach to the restructuring of the banking sector was critical,” said the communiqué.

It said the Monetary Council addressed the issue of the importance of the private sector in spearheading the growth agenda and the need for defining the appropriate public and private sector collaboration which was needed in the new growth thrust.

“Council agreed to maintain the minimum savings deposit rate at 3.0 per cent; and the Central Bank’s discount rate at 6.5 per cent. Council further agreed that the creation of a single financial space within the Currency Union is a matter of great urgency to stabilise and consolidate the banking sector,” it said.

The need was underscored to synchronise the financial programmes of member countries, deepen the fiscal reform initiative and tighten the coordination of fiscal policy in support of the restructuring of the banking sector.

It was also agreed to further refine and coordinate a regional and national debt strategy to support the restructuring of the banking sector.

Council received an update from the Chairman of the Ministerial Subcommittee on Insurance in respect of the BAICO and CLICO situation and noted that major efforts were continuing to secure additional funding to complete Phase Three (3) of the ECCU Policyholders Relief Programme and proceed to an additional phase for policyholders over $30,000; and that an alternative resolution strategy for the CLICO International Life Insurance Limited (CIL) is being pursued with Barbados.

Council also acknowledged and thanked BAICO and CLICO policyholders for their patience in this matter.

The Monetary Council also agreed to expedite and complete work on the new Insurance Law for the ECCU and continue preparatory work for the establishment of the Eastern Caribbean Financial Services Regulatory Commission.

Council also agreed to expedite and complete work on the new Insurance Law for the ECCU and continue preparatory work for the establishment of the Eastern Caribbean Financial Services Regulatory Commission.

The communiqué said a steering committee comprising regulators, industry representatives, an Attorney General and a member from the Core Committee on Insurance will be asked to coordinate this work and prepare a report for Council in the shortest possible time.