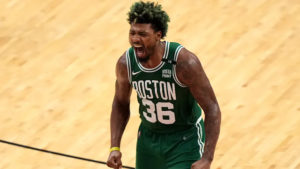 The Boston Celtics are better with Marcus Smart and Al Horford, as it turns out.

The Defensive Player of the Year and the one-time All-Defensive forward anchored a suffocating defensive performance in Game 2 of the Eastern Conference finals, and the Celtics’ offense matched the effort. The Miami Heat had no third-quarter answers to Boston’s blistering first half this time around in a 127-102 loss.

The series is tied 1-1 on its way to Boston for Saturday’s Game 3.

“I was pumped,” Smart told the ESPN broadcast after the win. “I felt bad that I couldn’t be out there [in Game 1] with my teammates and go to battle with them. We’re playing a really good Miami Heat team, and it’s a blessing to be on the same court with them and going to war. It was tough not to be out there, but I got my rest, got my health back, got to watch and see some things and come out and execute this game.”

Miami’s 18-8 start to the first quarter was a concern for the Celtics, who were bullied in the second half of Game 1. But Boston responded by outscoring the Heat 60-21 over the next 18 minutes to ice the game.

The Celtics made nine of their first 11 3-point attempts, a team playoff record for the first quarter. After his dismal Game 1 outing, Jaylen Brown converted all three of his long-distance attempts to score 11 of his 24 points in the opening quarter. Even two early fouls for Jayson Tatum could not slow the Celtics, who outscored Miami 20-4 with their superstar on the bench for the final four minutes of the first quarter.

Tatum returned to score 17 of his 27 points in the second quarter, nearly matching the Heat by himself.

“Me and Al, when things kind of got a little spicy for us, we settled ourselves down,” added Smart. “Me and Al have been doing this for a while. We’ve been doing this the longest on this team. We know what it takes, and it’s going to take everything. We’ve got to help Jaylen and Jayson. They’re putting a lot of pressure on them, rightfully so; they’ve earned that, and we’ve got to come in and help them.”

Boston led 70-45 at the half, when the discrepancy between their 59/63/100 shooting splits and Miami’s 41/32/43 looked even more lopsided. The Celtics’ top-rated defense returned the favor to a Heat outfit that smothered them in third quarter of Game 1, scoring 16 points off eight turnovers through two quarters.

Jimmy Butler tried to inspire another third-quarter comeback, scoring 16 of his 29 points in the third quarter, but his Miami teammates failed to follow his lead. His three-point play cut Boston’s lead to 82-65 with 3:46 remaining in the third, but the Celtics pushed their lead back to 25 by the end of the quarter.

Making matters worse, the Heat lost P.J. Tucker to a knee contusion at the 7:28 mark of the third quarter. Yahoo Sports’ Chris Haynes reported Tucker will have an MRI on Friday morning. The Heat are already without starting point guard Kyle Lowry, whose left hamstring has sidelined him for eight of Miami’s last 10 games. How quickly the fortunes have changed from game to game for the two teams.

The Heat starters never saw the floor in the fourth quarter. When Celtics coach Ime Udoka pulled the remainder of his starters with less than six minutes to play, Smart left the game with 24 points, 12 assists, nine rebounds, three steals and a lockdown defensive effort. Horford added 10 points on 4-for-4 shooting to his defensive versatility, and the Celtics at full strength looked like the best team in the East again.