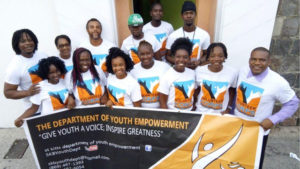 Social and political activist Dwyer Astaphan is of the view that the young people of the federation will likely decide the next election, and as a more informed demographic, will not be swayed by political gimmickry.

Dwyer Astaphan, a former government minister, speaking on this week’s edition of his talk show The Operating Room.

“We in Operation Rescue are looking especially at what we call the millennials –those are the young people who were born from during the 1980s come forward. Many of them are not into following the same politics and political tribalism of their parents and grandparents. Many of them are not impressed with roads and sidewalks, necessary as those things may be. Many of them see way past the STEP, way past the PAP, and they see in which, despite the boasts of politicians, that so many people are still in critical need in so many critical ways. Many of the millennials I speak to and and listen to are not impressed with the dependency syndrome –people depending on the politicians- and at election time politicians depending on those same people; they’re not impressed with this culture of entitlement they see that has been nurtured into this country.

“We are going to be speaking in no small measure during this election year to the young people in this country. The young people want to be in business, in the professions, in the trades, in software and hardware, in the tech industry, research and development, in entrepreneurship, the young people are becoming more discerning. They are not like their parents and grandparents who have been taken for granted wand who themselves have taken things for granted.’

The retired politician is calling on the electorate to demand transparency from the politicians of all parties and also for candidates to debate their counterparts on the issues affecting the nation.

“We are praying that the people of St. Kitts and Nevis in this year will make it your business as citizens and voters to ensure that you are fully informed and enlightened on the issues that determine the sustainable success and buoyancy of the nation as a family of human beings, a society, a community, economy, and as a body politic.”

Mr. Astaphan made known his support for a fixed date for elections, saying waiting on a politician to ring the bell is fundamentally unjust