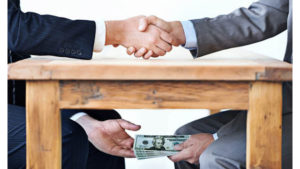 Social and political activist Dwyer Astaphan is shining a light on the awarding of government contracts for work and services at inflated prices for the purposes of providing kickbacks for high level players.

The former Cabinet minister said those involved are engaging in corruption, and the taxpayers are the ones left holding the bag.

“One would not expect in an honest and transparent environment for the contractor to get a pumped up price beyond what is fair for the taxpayers to pay, ending up with more money than he should be getting under the contract. One would not expect that in an honest and transparent circumstances. If you’re contract has been carefully examined by the appropriate authorities it is most unlikely that a fair profit would allow you to ‘give back’. If you have enough of a fair profit for you and money is left to give back the the contract sum was wrong in the first place it was inflated, the contract has been overpriced.

“So the question is why would that contract allow you a buffer that in addition to your profit you can ‘give back’ and to whom? That extra cost for the overpriced contract is borne by you know who- you, the people of this country. That, in my opinion, is corruption.”

He said service providers, developers and investors are also engaging in corruption when they make sweetheart deals such as inflated contracts and concessions, in exchange for their financial support of political parties.

Mr. Astaphan said contracts should be assessed and awarded on merit. He said citizens have the right to scrutinize government projects and other contracts for possible corrupt practices.

He was at the time expressing his views on this week’s installation of his radio talk show the Operating Room.