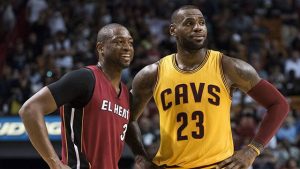 On Thursday morning, Dwyane Wade served as a guest co-host of ABC’s Live With Kelly. The big news, of course, was last night’s bombshell that Wade is leaving the Miami Heat for the Chicago Bulls after 13 seasons and three championships.

But Wade and his wife, Gabrielle Union, also dished on Wade’s close friend and former Heat teammate LeBron James, who is apparently pretty frugal. James, we learn, is not a fan of using mobile data if he’s not on wi-fi.

It’s a shockingly normal struggle for someone as famous and wealthy as James, and one everybody who’s on a shared family plan can relate to. James can afford all the data he wants, but someone of his stature almost certainly owns multiple phones, and that can get expensive. You have to draw the line on spending somewhere, and for the four-time MVP, this is it.

If you ever wanted to feel like you go through similar things as one of the most famous athletes in the world, this is your lucky day. James never been more relatable than he is now, with the revelation that he has such a mundane, normal-person problem with using too much smartphone data.