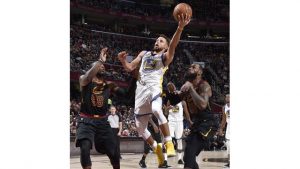 Stephen Curry #30 of the Golden State Warriors goes to the basket against the Cleveland Cavaliers on January 15, 2018 at Quicken Loans Arena in Cleveland, Ohio.

Once the lead swelled to 14, Kevin Durant waved both arms like a boxing referee stopping a fight.

Another knockout on the road for these Warriors.

Durant scored 16 in the third quarter for the defending champions, who clamped down on defense and pulled away in the fourth to remain unbeaten outside Oracle Arena since Nov. 22. It’s not that they play poorly at home, but Durant said the Dubs take a different identity when they travel.

”At home, we just relax a little bit,” Durant said. ”This is who we are when we’re on the road.”

LeBron James scored 32 points and Kevin Love 17 for Cleveland, which had its home winning streak stopped at 13. Isaiah Thomas, getting his first taste of the Warriors-Cavaliers rivalry, had 19 points in 32 minutes – his most in five games as he returns from a hip injury.

It was Golden State’s second straight win over Cleveland, which has dropped eight of 10 dating to a loss to the Warriors on Christmas Day. The Cavs were down just 93-91 entering the fourth, but missed 17 of 19 shots to open the period, and Golden State throttled away.

”It seemed like the rim just got smaller and smaller,” James said. ”But I like our effort. If we continue that going into our next few games, then I like where we are.”

The teams have met in the Finals each of the past three years. And while there’s no guarantee there will be a fourth matchup, at this point only one of them looks prepared in January for June.

Durant, though, expects the Cavs to improve as they incorporate Thomas.

”Everyone knows it’s going to take a while to get into a comfortable groove here,” he said. ”It’s a new system, so I don’t think this game was any indication of what’s going to happen with this team down the line. They’ll be much better than they are right now – and we all know that.”

Cleveland was home after going 1-4 on a road trip that included blowout losses in Minnesota and Toronto.

For three quarters, the Cavs matched the Warriors shot for shot. But with Durant and Curry on the bench, a Golden State lineup of Andre Iguodala, Draymond Green, David West, Klay Thompson and Shaun Livingston stretched the lead.

”That unit, they won us the game with their energy and their effort,” Durant said. ”They pushed the basketball and they set us up well to kind of end the game in the last three or four minutes. That’s what a well-rounded team does.”

Despite their recent struggles, the Cavs remain a confident bunch, and they showed some early swagger. After he and his teammates were introduced to ”Gloves Are Comin’ Off” by rapper 7kingZ, James came out swinging.

He was in attack mode from the start, scoring 16 points in the first quarter and setting the tone for the Cavs.

Later in the half, James retreated down the lane for a huge block on Durant, blasting the ball off the glass to trigger memories for Cleveland fans of his famous chase down on Iguodala in the closing minutes of Game 7 of the 2016 Finals.

Curry threw down a two-handed dunk in the third quarter that surprised his teammates.

”It was like a dream,” Curry said. ”I thought I was going to wake up and I was going to be back in my bed in the hotel, but it actually happened. Somebody said it was like a unicorn sighting. It was pretty cool for me to get a dunk in that situation.”

After being asked several times about the play, Curry said, ”Seven dunk questions. This is crazy.”

Thomas came away from his most extensive court time feeling good.

”I’ve just got to get in shape,” he said. ”I’ve got to get my legs back. I’ve got to keep pushing, keep working and it’ll come back.”

Warriors: Their franchise record for consecutive road wins is 14 set in 2015-16. … Recorded 33 assists on 41 made field goals. … Kerr smiled when reminded that James recently said his best basketball is still to come. ”I know he’s better now than he was four years ago,” Kerr said. ”That’s insane when you think about that because that should have been his prime, four years ago, and he was already an MVP and a champion. He’s better – better shooter, better player. He keeps getting better. So I believe him.”

Cavaliers: James needs 41 points to become the seventh player to score 30,000 career points. … Coach Tyronn Lue still believes the Cavs are the Eastern Conference’s best team ”because we’ve got the best player in the world.” … While Thomas remains on a minutes restriction, Lue said he expected the All-Star guard to struggle as he works himself into game shape after being sidelined seven months. ”He’s moving pretty good,” Lue said. ”It’s just mental.”

Cavaliers: Host Orlando on Thursday. The Magic beat the Cavs earlier this season in Cleveland.