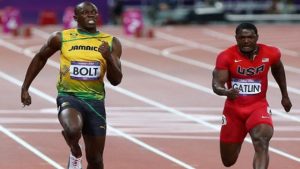 The 34-year-old Gatlin is the most obvious symbol of the logical confusion gripping this year’s Olympics, where some athletes convicted of doping offences will be free to compete while others are banned. Gatlin, twice suspended for failing drugs tests, heads to Rio as the biggest threat to Jamaican rival Bolt’s hopes of retaining his 100 meters crown.

Yet the presence of Gatlin, Merritt and Gay in Rio has been seized upon by critics in Moscow who have cried double standards over the International Olympic Committee’s policy of banning all Russian athletes who have previously served doping bans.

The controversy makes it inevitable that Gatlin is likely to be cast as track and field’s pantomime villain once more when the action gets under way in Brazil. The 2004 100m champion’s duel with Bolt at the World Championships in Beijing last year was framed as a battle for the soul of athletics, with the Jamaican prevailing to general relief across the sport.

A year later, Gatlin is still wearily rejecting a narrative he sees as unfair. “I understand the media. They want to be more creative and be able to make storylines more sensationalised,” Gatlin told reporters in June.

Gatlin insists that his backstory is far more nuanced than the blunt, oft-applied label — “two-time doping cheat” — implies. His first doping suspension in 2001 arose from the use of Adderall, which contains amphetamine.

Gatlin had been using the drug since childhood to treat attention deficit disorder. The US arbitration panel that heard his case ruled Gatlin was “certainly not a doper.” A second positive test in 2006 found excessive levels of testosterone in his system. Gatlin blamed the results on sabotage by a therapist with whom he was locked in a financial dispute.

Gatlin was banned for eight years for that offence, later reduced to four years on appeal.

Merritt, who is also hoping to reclaim the 400m crown he last won in Beijing, heads to Rio after seeing his career disrupted in 2010 for three positive drugs tests which he blamed on an over-the-counter penis enlargement product.

Merritt, 30, confessed to a “foolish, immature and egotistical mistake” for his drugs case, speaking of a deep-seated “embarrassment and humiliation”. Gay, one of the few men to have beaten Bolt over 100m, tested positive in 2013 and was suspended for only one year by the US Anti-Doping Agency (USADA) after cooperating with authorities.

Bolt suggested Gay should have been banned for life instead. “The message should be: ‘If you cheat, you’re going to be kicked out of the sport’,” he said. Gay insists he does not deserve to be described as a drugs cheat, blaming instead manipulation by his former coach Jon Drummond, who was banned for eight years.

“The true fans are understanding of what I’ve been through,” Gay said in a 2015 interview. “For them to look up to me still, that means a lot.”