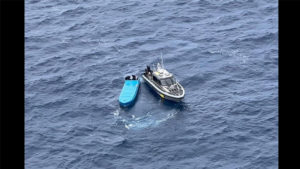 Three men were detained by the Dutch Caribbean Coast Guard as they attempted to smuggle drug into Curaçao yesterday.

The coast guard reported that a helicopter team spotted a vessel entering into Curaçao waters in a known smuggling route.

A patrol vessel was activated and it intercepted the smugglers.

The three suspects, two Colombians and a Dominican, were detained and handed over to the Curaçao Police Force after packages found on the vessel were determined to be illegal drugs, which weighed over 1,000 pounds.

The illegal drugs have since been destroyed and the men will appear in court soon.