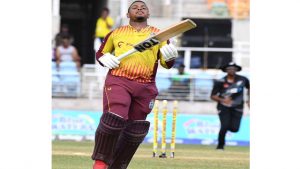 West Indies left-handed batsman Shimron Hetymyer was on Monday scheduled to take part in the Guyana Cricket Board’s inter-county competition that is being held for the first time in five years, after being dropped from the West Indies’ Twenty20 World Cup squad last week.

Hetmyer made himself available to play in the 2022 Senior Male Inter-County One-Day 50-Over Tournament after missing a rescheduled flight to join the rest of his Caribbean teammates in Australia where they played a two-match T20 series against the hosts in preparation for the T20 tournament starting next week.

Some of his Windies teammates — all-rounder Romario Shepherd, left-arm spinner Gudakesh Motie, and off-spinner Kevin Sinclair — will join him in the Berbice squad that will be going up against two other county teams, Demerara and Essequibo, and a Guyana Cricket Board (GCB) President’s XI in the October 10-16 competition at the Georgetown Cricket Club ground, Bourda.

The GCB said it expected Hetmyer, the Guyana Amazon Warriors captain in the recent Caribbean Premier League (CPL), to showcase his class and dominance in the inter-county competition.

Cricket West Indies (CWI) announced that Hetmyer had been replaced by Shamarh Brooks for the October 16-November 13 World Cup after the 25-year-old did not get on the flight that was rebooked from October 1 to 3 at his request.

According to Director of Cricket Jimmy Adams, Hetmyer had informed CWI that he “would not be able to get to the airport in time” for the flight to New York, which was the first leg of his trip.

“Whilst we changed Shimron’s flight from Saturday to Monday due to family reasons, it was made clear to him that if there were any further delays and issues with his travel to Australia then we would have no choice but to replace him in the squad, as we are not prepared to compromise the team’s ability to prepare for this extremely important global event,” Adams had said.

However, a post in Hetmyer’s wife’s Instagram stories, which Hetymer reposted, suggested there was more to that situation.

“There’s always another side to every story told #whatsinthedarkmustcometolight @shetmyer always gonna support you love no matter what!” Nirvani Hetmyer wrote.

Neither Hetmyer nor CWI has spoken publicly on the matter since.