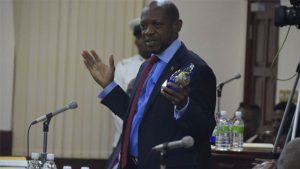 “[PM]Harris is a public disgrace and embarrassment to all of us and the members of his party.”

Dr. Douglas, former Prime Minister, said Dr. Harris and the coalition Team Unity administration has been plagued with local, regional and international scandals which have brought shame to the people of St. Kitts and Nevis.

“He has become a total national disgrace and an embarrassment to the citizens of St. Kitts and Nevis, those who are here and those who are living abroad. Harris has become an international culprit for scandals in this country, hurting our pride as Kittitians and Nevisians at home and abroad.”

He went on to outline some of the reasons that the electorate should ditch the present government and return the Labour Party to power, highlighting several cases of alleged nepotism on the part of the Prime Minister.

“I say to you, we are in a state of disbelief total disgrace, total embarrassment at home and abroad under this government. When they were in opposition they spoke loudly and clearly that we need to have integrity in public life, we need to know and make sure that people are not stealing, we need to make sure that the people in the Labour government are investigated, we need to do this and we need to do that, give us the opportunity and you will see we will bring good governance back to St. Kitts and Nevis.

“You can see what is happening today. Harris has enriched himself and his family, he has placed his family members in very key positions in finance and in the economy in particular. His brother controls the Development Bank; his brother still sits on the Board of Social Security. Social security, when I was there, loaned the Development Bank millions of dollars. I suspended Harris because there were serious allegations of misappropriation and serious allegations that monies loaned to the Bank by Social Security was not being accounted for. Today, as soon as the government change placed back into the bank and its control as well as Social Security by being a member of the board of directors.

“We need to make sure that lawyers do not have to go and beg and bawl to the Registrar of the High Court to get their matters and their documents dealt with in a timely matter. We need to make sure that Donna Harris the Magistrate does not continue to treat our people with total disregard and disdain, abusing and embarrassing them in full court because she is a Harris. That has to come to an end! Another sister in charge of government payroll, suspended hard working young men inside there who she met there, over one year suspended on half pay. That kind of nonsense must come to an end!

“And so I say to you tonight the time has come for us to end the embarrassment and disgrace in our country.”

Prime Minister Harris and Dr. Douglas were scheduled to appear in court on Wednesday in a civil suit brought by Dr. Harris over comments made by Dr. Douglas about the stem cell clinical trials scandal.