Home / Weather / Dorian Near Hurricane Strength, No Longer A Threat To The Leeward Islands

Dorian Near Hurricane Strength, No Longer A Threat To The Leeward Islands 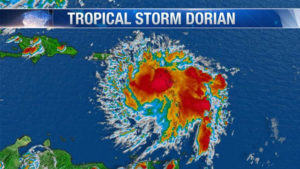 St. Kitts and Nevis has officially been spared the major effects of Tropical Storm Dorian.

On Wednesday morning Dorian had strengthened to near hurricane strength of 70 mph with higher gusts.

According to a tropical cyclone information statement issued by the St. Kitts Met Office, Dorian was located approximately 90 miles west of St Kitts & Nevis and it is not a threat to the Leeward Islands.

However outer rain bands, are expected to trigger occasional rainfall over these islands -some of which will be moderate to heavy and accompanied by thunder storms which could lead to flooding in some areas.

At 11 am Dorian was located just 25 miles south east of Croix moving toward the northwest near 13 mph.

Dorian is forecast to become a hurricane later today Wednesday and continue strengthening during the next few days over the Atlantic waters.

A Hurricane Warning has been issued for the U.S. and British Virgin Islands, while a Hurricane Watch and a Tropical Storm Warning are in effect for Puerto Rico.