“Don’t worry, I am in good health” 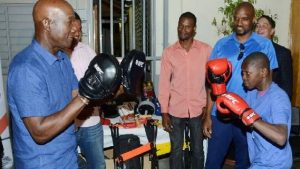 But he has assured citizens that there is nothing to worry about, as he was in good health.

Speaking on CNC3’s Morning Brew on Wednesday, Rowley dispelled rumours that he is ailing.

The Prime Minister said he was speaking the truth and it was simply up to the public to accept his word.

On his return from the United States where Rowley attended a series of meetings with major international energy companies in Houston, Texas, and then proceeded on vacation leave, rumours surfaced on social media that he had been diagnosed with a terminal illness.

Rowley said, “This country has been so accustomed to being lied to by its leaders that when you tell them the truth they can’t deal with it. It is exactly that, rumours and rumours are statements of a certain type. I was as open as any prime minister has ever been about my health but it seems as though many people would like to wish me a particular kind of health. There is a responsibility to differentiate between fact and lies.”

Rowley said he had informed the country that his doctors who had been monitoring him for two decades had seen changes in his health and he required a medical check-up.

“I have no intention of making my medical record public. I speak about it, but there is no requirement. I told you when I get the result I would let you know. I came back and fortunately and thankfully the results are that I am in good health and I have nothing to worry about,” he said.