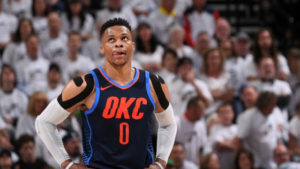 The good news for the Oklahoma City Thunder? Russell Westbrook made good on his guarantee; Ricky Rubio, indeed, did not notch a second consecutive triple-double on Monday.

The bad news? Absolutely everything else.

The Jazz broke away from Oklahoma City in the third quarter, thanks to the scoring of rookie star Donovan Mitchell and the playmaking of Rubio, to make a tightly wound game start unraveling. And when Utah began to push, cashing in on the open looks their playmakers found in OKC’s fractured defense while cranking up the defensive pressure on a team that’s been perilously thin all season long, the Thunder buckled, their execution getting lost in a haze of unchecked emotion and fugazi physicality in a circling-the-drain fourth quarter during which they never seemed to mount a legitimate comeback threat.

Utah busted the Thunder up, utterly and without remorse, with consecutive 3-pointers by Mitchell and Ingles leading both coaches to empty their benches — perhaps, given how chippy things had become by that point, a few minutes too late — and let the reserves finish off a 113-96 Jazz win. The Jazz now hold a commanding 3-1 lead in the best-of-seven series, and will look to finish off the reeling Thunder back in Oklahoma City in Game 5 on Wednesday night.

Mitchell continued to look like anything but a rookie going through his first playoff series. Utah’s leading scorer patiently carved up the Thunder defense time and again en route to a game-high 33 points on 13-for-28 shooting to go with seven rebounds, four assists and zero turnovers in 39 minutes of work. Again: rookie point guard, leading his team in minutes, using up a boatload of offensive possessions … and zero turnovers. Pretty special.

Twenty of Mitchell’s points came in the second half to help propel Utah to the dominating victory, and to put the Rookie of the Year hopeful into some awfully rarefied air as he continues the stellar start to his postseason career:

After a chilly start to Game 4, Ingles rediscovered his shooting touch late in the second quarter and spent the rest of the game dropping bombs on Oklahoma City. The Aussie point forward finished with 20 points on 6-for-12 shooting, including a 5-for-11 mark from 3-point range, to go with four assists, three rebounds, a block and a steal in 30 minutes. Big men Rudy Gobert (16 points, 10 rebounds) and Derrick Favors (13 points on 6-for-9 shooting, four rebounds, two blocks) did their part to plug up the middle, protect the rim, set screens, dive hard and finish strong at the basket.

Rubio’s shot-making didn’t carry over — 13 points on 4-for-12 shooting, just 1-for-6 from 3-point range — but he played a strong floor game, dishing eight assists and grabbing six rebounds while teaming with Gobert to lead a defense that once again stifled the Thunder’s attack.

Westbrook went 7-for-18 from the field for his 23 points. George got his 32 more efficiently, thanks to a dozen trips to the foul line, but even his 19 second-half points weren’t nearly enough to stem the rising tide. Carmelo Anthony, imported this summer to be the third scorer on a team with title aspirations, finished with 11 points on 5-for-18 shooting. The Jazz strangled Oklahoma City, limiting the Thunder to 39.3 percent shooting as a team, a 5-for-26 mark from 3-point range, and 14 turnovers against 10 assists.

Coming off a convincing Game 3 defeat and needing a big outing to regain home-court advantage and seize back control of their first-round series, the Thunder opened up Game 4 intent on bringing enough aggression and physicality to tilt the tide back in their favor. It worked for them in the early going, as strong starts from Westbrook and George staked OKC to a six-point lead after the first quarter, and kept them on top deep into the second.

And yet … Westbrook’s edge seemed a bit too edgy, with his pell-mell drives and cranked-up intensity sliding over the edge into three early fouls. George seemed to be getting pushed out of his comfort zone by the relentless presence and trash-talking of Joe Ingles. Anthony still wasn’t hitting anything, and Oklahoma City still wasn’t getting anything from its bench. And the Jazz were still getting all those tasty looks out of the pick-and-roll game helped turn Games 2 and 3. They just weren’t making them.

You could feel it coming. And then, all of a sudden, there it was.

With just under two minutes to go in the first half, the Jazz ran a HORNS set, with Mitchell stationed at the left elbow and Gobert on the right. Rubio dribbled away from his center — and away Oklahoma City center Steven Adams, who’d been drawn away from the rim — going left off Mitchell’s hip with a step on Westbrook. When Rubio beat Russ, George had to slide down from the corner to protect the rim, because there was nobody else there. That left Ingles open in the right corner, and despite four early misses from beyond the arc, Rubio fed him again.

This time, Ingles splashed the jumper down, giving the Jazz a 50-49 lead. Seconds later, Rubio slid his feet and got position in front of a driving Westbrook drive, taking a charge that gave Russ his fourth personal foul — all of which Rubio had a hand in putting on Westbrook’s ledger — with 1:36 to go in the half. Ingles would drill corner 3s on the next two Jazz trips, sending the Salt Lake City crowd through the roof, before Mitchell drove for a layup in the closing seconds to give Utah a 58-52 lead entering halftime.

To start the third quarter, OKC’s Donovan juggled his defensive matchups, putting Westbrook on Ingles rather than Rubio — perhaps for fear of picking up a quick fifth foul — George on Mitchell, and Corey Brewer on Utah’s Spanish point guard. (Asked after the game about his evening defending Rubio, Westbrook shut down the line of questioning he invited with his post-Game 3 comments: “It was not about me or him. Let’s get past that. We’re done with that.”) The shuffled assignments made no difference, though. The Jazz just kept getting everything they were looking for offensively to start the second half, stringing together bucket after bucket to inflate the lead and put the Thunder on the brink of a blowout.

A Rubio-to-Gobert alley-oop dunk made it 67-52, capping a 20-3 run spanning the end of the second quarter and the start of the third. Oklahoma City briefly made a push, getting a couple of baskets from George and a Westbrook jumper to get back within 10 with just under eight minutes to go in the third. They never got closer than that, though, as Utah held them to 4-for-12 shooting over the final eight minutes of the quarter to push the lead back to 17 entering a fourth quarter that was more notable for its extracurricular activities than for sparkling gameplay.

With so much at stake as the Jazz played to put the Thunder on the brink of elimination and Oklahoma City fought to get back to all-square, the intensity was at a fever pitch from the early going. The refs handed out four technicals before halftime, when the game was still in the balance. Things got dicier late, with the Jazz looking to protect a big lead and the Thunder looking to vent their frustration at the run of play running away from them.

First, Thunder reserve Raymond Felton took a swipe at Gobert, leading to a skirmish that escalated a bit when Westbrook — who wasn’t in the game at that point — slid over to get in the French center’s face over the matter:

A scant 2 1/2 minutes after Felton and Gobert got their double technicals, the two teams tangled again after Westbrook wrapped up Jae Crowder to keep him from running out on the fast break. The former Celtic and Cavalier took exception to that, and he let Westbrook, Anthony and an on-rushing Adams know about it. The problem: he communicated it to Adams by elbowing him in the face.

Inadvertent though the shot may have been, it still got Crowder the gate, earning him an ejection with 5 1/2 minutes left in the game. He finished with six points, seven rebounds, three assists and three steals in 28 minutes off Utah’s bench, teaming with swingman Royce O’Neal (10 points, nine rebounds) to give the Jazz second unit a two-way spark.

The Thunder, for all their star power, bluster, sound and fury, lost their spark in Utah. All season long, Oklahoma City’s been maddeningly inconsistent, capable of wiping the floor with title contenders one night and looking the next like they had no idea how to play together. For the last week, they’ve skewed toward the latter. If they can’t swing back to the sunnier side of the street by Wednesday, this frustrating season will come to an end — and perhaps, so will the chance to turn the Russ-PG pairing into a long-running partnership.

We’ve learned this much, though: talking alone won’t do the job. The Jazz don’t fear the Thunder, because Oklahoma City has given them nothing to fear; Utah knows that, if Westbrook and George get themselves on tilt, the game’s theirs for the taking. If they want to save their season, the Thunder are going to have to do the work. And they’re running out of time.