Donald Trump and his son Donald Trump Jr., without evidence, accuse Pfizer of deliberately waiting until after Election Day to release its COVID-19 vaccine trial results 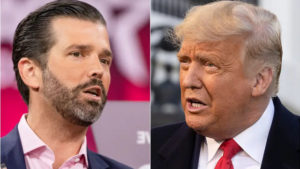 President Donald Trump and his son Donald Trump Jr. claimed on Monday that Pfizer deliberately waited until after the US election to announce the promising early results from its COVID-19 vaccine’s late-stage clinical trial.

They offered no evidence for their claims.

Pfizer on Monday said its experimental coronavirus vaccine had succeeded in the final stage of clinical trials: The shot was found to be more than 90% effective in preventing COVID-19, the company said, a milestone in the fight against the coronavirus pandemic.

Both Trump and his son took to Twitter to speculate about the timing of Pfizer’s announcement, made six days after Election Day.

Though it was Pfizer that made the announcement, Trump tweeted Monday night attacking the US Food and Drug Administration and Democrats, which he said “didn’t want to have me get a Vaccine WIN, prior to the election.”

He added that Pfizer “didn’t have the courage” to issue the statement earlier.

A Pfizer spokesperson told Business Insider that the timing had nothing to do with the election.

The younger Trump called the timing of Pfizer’s announcement “pretty amazing” and suggested he thought the timing was “nefarious.”

The president had previously claimed a vaccine would be ready by Election Day. In mid-October, Pfizer said it planned to submit its COVID-19 vaccine for FDA authorization in late November.

Trump also tweeted that if President-elect Joe Biden had been in the White House, “you wouldn’t have the Vaccine for another four years, nor would the FDA have ever approved it so quickly.”

The data Pfizer announced on Monday came from an analysis that took place while its coronavirus vaccine trial is still ongoing. The analysis was conducted by an independent group of scientists responsible for monitoring the trial. The outside scientists performed their analysis on November 8 and told Pfizer of the results that day.

Pfizer CEO Albert Bourla first learned of the trial results on Sunday, he told CNN in an interview on Monday, adding that he hadn’t yet seen the data yet himself.

Though Pfizer had looked at the data several times throughout the trial, it didn’t have enough infections in its test group to draw meaningful conclusions until Sunday, Bourla said.

When questioned about the “remarkable” postelection timing of the results, Bourla said Pfizer had simply released them “when the science told us the data was available.”

A Pfizer spokesperson told Business Insider that the timing “did not have to do with the election.”

Pfizer had initially planned to conduct the analysis after 32 people in the trial got sick with COVID-19. However, after discussions with the US Food and Drug Administration, the company decided to delay that analysis, conducting it after at least 62 people got sick, the company said on Monday. Pfizer didn’t say why it made that change.

By the time the outside experts analyzed the study, 94 people had gotten sick, mainly among those who received a placebo, instead of the working vaccine. The results showed that Pfizer’s vaccine was more than 90% effective at preventing the coronavirus, Pfizer said.

Bourla had repeatedly talked up the prospects for his company to deliver coronavirus-vaccine data in October. In September, he appeared on The “Today” show and CBS’ “Face The Nation” to predict “we will have an answer by the end of October.”

Pfizer’s ambitious timeline aligned with President Donald Trump’s repeated predictions of having success on a vaccine before Election Day, but it didn’t come to pass.

He had called the trial results “SUCH GREAT NEWS!”

Vice President Mike Pence also tweeted about the development, though he misleadingly presented Pfizer’s milestone as an accomplishment of the Trump administration.

Pence tweeted that Pfizer had developed its vaccine “thanks to the public-private partnership forged by President Trump.”

While the US government did place a large order over the summer for Pfizer’s vaccine, the company was never part of Operation Warp Speed, the government’s initiative to accelerate the development and distribution of a vaccine, and Pfizer said it had never taken any money from the US government to aid its research.