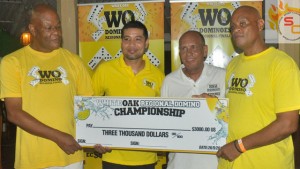 Defending champions found themselves slammed off their pedestal by Sint Maarten on Saturday evening at the Octagon Club in the fifth and final match of the 2015 White Oaks-sponsored Regional Pairs Domino Tournament.

Having beaten their closet challengers in Dominica 2-1 in the best of three encounter – 6-3, 0-6, 6-3, it looked an easy slam for the defending pair of Alexis Davis and Joel Pompey against Sint Maarten, but fate had the final laugh.

Sint Maarten won the encounter 6-4, 6-5 to send the tournament into a tailspin and managers and organisers for their calculators to determine which team had won the most hands.

Hosts St. Vincent and the Grenadines, Dominica, and Sint Maarten ended the tournament tied on eight points apiece, followed by Antigua on four points, St. Kitts/Nevis on two points, with Grenada in the cellar position with zero points have lost all of their matches.

Following intense discussions over the interpretation of the rules which finally came to an end when Ricardo Aquing – the Angostura Market Development Officer went through the rules, and instructed that the champion would be decided through the system as indicated by the tournament rules.

“All of the teams played according to these rules so there cannot be any change to the rules now,” he pointed out to the managers and organisers seated.

Following the calculation of hands won, Dominica was crown champions having won 65 hands, Sint Maarten won 63 hands, while St. Vincent and the Grenadines had won only 60 hands.

Each team played five matches in the round-robin best-of-three match, and by the second round, only Dominica and St. Vincent and the Grenadines was left unbeaten.

The third round cemented position of the table toppers in Dominica and St. Vincent and the Grenadines with six points apiece, Sint Maarten on four points, Antigua on two, and Grenada and St. Kitts/Nevis with nil points each.

So with the fourth round being crucial, St. Vincent and the Grenadines pair, energized by the boisterous home fans won the set 6-3, But the Dominica pair gave the hosts a scare with a 6-nil second set win, but the Vincentians held their nerve to win the deciding third set 6-3 and get two points closer to retaining the title.

To the fifth and final round of matches with Antigua and Dominica facing off on table one, St. Maarten and St. Vincent and the Grenadines clashing on table two, and Grenada and St. Kitts/Nevis on table three.

Dominica made quick work of Antigua 6-5 6-0, St. Kitts/Nevis slammed the Grenadians off any pretensions 6-3 6-0, and then to table two where tension was building.

Sint Maarten won the first set 6-4, and a ding-dong battle ensued in the second set. At five games apiece, Sint Maarten held their cool to win 6-5, and send the championship decider to the calculators.