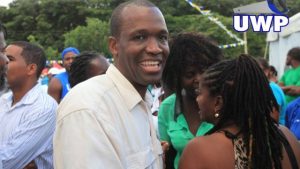 Economist Dr Thompson Fontaine has been elected as the leader of the main opposition United Workers Party (UWP), vowing to continue the party’s position on electoral reform through legal means including civil disobedience.

Fontaine, a policy advisor to the government of South Sudan, replaces Opposition Leader Lennox Linton, who stepped down in October and was elected unopposed as President of the opposition party on Sunday.

Fontaine, who is on EC$75,000 bail on a charge of inciting violence and obstruction of justice dating back to 2017, told supporters that he intends to continue with the party’s push for election reform in Dominica.

The UWP is boycotting the December 6 general election that Prime Minister Roosevelt Skerrit called two years ahead of the constitutional deadline, insisting that electoral reform, including voter identification cards and a new voters list, must be dealt with prior to holding the polls.

“As a political leader, together we will continue to champion electoral reform. Again as part of that process, we will again appeal to the President of Dominica (Charles Savarin) to exercise his executive authority under section 53 of the Constitution and suspend those elections until there is electoral reform.

“Rest assured that we in the United Workers Party will pursue every legal means including through the courts, including civil disobedience and all within the law to ensure that there is electoral reform. Together we will neither stop nor rest until democracy is restored and there is full electoral reform in Dominica,” said Fontaine.

The UWP, as well as the other major opposition party, the Dominica Freedom Party (DFP) have been urging citizens to boycott the elections until Sir Dennis Byron, the former president of the Caribbean Court of Justice (CCJ) completes his assignment as the sole commissioner advancing the efforts towards electoral reform.

Sir Byron had proposed presenting the first phase of his report by the end of November with the Parliament tabling the Register of Electors legislation in December and the plan to enact it in January 2023.

Meanwhile, Prime Minister Skerrit, speaking at a political rally of his ruling Dominica Labour Party (DLP) on Sunday night, said he now welcomed the decision of the UWP to stay away from the polls.

“God works in mysterious ways and sometimes we don’t see it…but the Lord wants to have as part of the national reset greater unity in our country, removing this political tribalism and hate that exists in our country…

“This is why when the Workers Party said they were boycotting elections…this is the Lord’s work, The Lord has said he does not want these kind of people in Parliament in Dominica anymore. They too divisive, they spewing hate and hatred too much in our country.

“We don’t have to agree all the time, but we have to respect each other,” Skerrit said, adding the main opposition party has “turned brother against brother…and that’s not right”.

Skerrit 50, who has been prime minister here since 2004, is one of six DLP candidates who will not face the electorate on December 6, having been nominated unopposed in their constituencies.