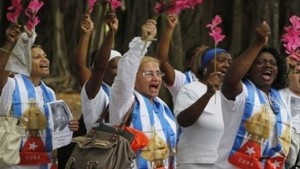 HAVANA, Cuba (AP) — Three dissidents were free Thursday after being abruptly released in what a leading human rights advocate said was part of Cuba’s deal with Washington to release 53 members of the island’s political opposition.

Neither the Obama administration nor the Cuban government spoke publicly about the releases, adding to the unanswered questions swirling around the deal and the broader detente that the two countries announced Dec. 17.

President Barack Obama ended five decades of official U.S. hostility toward communist-governed Cuba by announcing that, along with an exchange of men held on espionage charges, he would move toward full diplomatic ties, drop regime change as a U.S. goal and use his executive authority to punch holes in the longstanding trade embargo.

His Cuban counterpart, Raul Castro, welcomed the announcement but said detente would not lead Cuba to change its single-party political system or centrally planned economy.

U.S. officials told reporters on Dec. 17 that Cuba had agreed to free the 53 detainees, considered by Washington to be high-priority political prisoners. Castro said they would be released in “a unilateral way.” But since then, neither Cuba nor the United States has publicly identified anyone on the list or announced they have gone free.

Facing criticism at home, U.S. officials said they never expected Cuba to move immediately to release the prisoners. They said the U.S. was avoiding public complaints that could provoke a backlash from Cuban officials.

For many Cuban-Americans and U.S. conservatives, the apparent lack of movement supported complaints that Obama’s secretly negotiated deal was too opaque and had failed to win sufficient concessions from Cuba.

“It’s unfair for us Cubans and Cuban-Americans not to be able to influence this situation that has such a tremendous relevance for the future of Cuba,” said Francisco “Pepe” Hernandez, president of the Cuban American National Foundation.

On Wednesday, the head of Cuba’s Human Rights and Reconciliation Commission, Elizardo Sanchez, told The Associated Press that 19-year-old twins Diango Vargas Martin and Bianko Vargas Martin had been released without any of the judicial procedures that normally precede the end of political cases. A few hours later, he said a third dissident, Enrique Figuerola Miranda, was let go under similar circumstances.

Sanchez said he believed the three releases were the start of a wider liberation of political prisoners. If he is right, the criticism of the prisoner deal could quickly lose momentum.

But clarity about the fate of the prisoners would answer only one of the questions still hanging over the U.S.-Cuba deal worked out by small teams of negotiators behind closed doors over the 18 months leading up to the announcement.

Relatives of Rolando Sarraff Trujillo, a U.S. spy released under last month’s deal, say they are puzzled about why they have yet to hear from him. And Cubans are wondering why former President Fidel Castro has said nothing in public more than three weeks after the announcement.

The freed twin brothers were members of the Patriotic Union of Cuba, a small dissident group considered to be the country’s most vehemently anti-government.

According to Amnesty International, they were arrested in December 2012 as they tried to return to their home in Santiago, where they lived with their mother, a member of the dissident group Ladies in White. They had been held on charges of using violence or intimidation against a state official.

“They’re prisoners of conscience and they’ve been freed immediately and with no conditions,” Sanchez said.

The twins’ mother, Miraida Martin, said her sons had been told they were being transferred to another facility but once outside the prison in far eastern Cuba they were suddenly set free without explanation.

“We think they’re on the list, but nothing’s been said about it,” she said.

Hernandez, of the Cuban American National Foundation, said he had been informed by the White House that Lady in White member Sonia Garro, her husband and a neighbor had been let go as part of the deal prior to both governments’ announcement of warming relations.