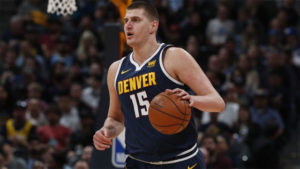 The Blazers and Nuggets both advanced to the second round in dramatic fashion. For Portland, it was a career-highlight Game 5 performance from Damian Lillard, who scored 50 points and clinched the series with a 37-foot dagger. His elite shot-making and unflappable confidence were on equal display as he waved goodbye to the Thunder and hello to endless highlight reels. Time will tell if he’ll sustain his unreal production during this second-round matchup vs. Denver.

For the Nuggets, of course, it came down to a Game 7 on their home court vs. the pesky Spurs. Even though they reclaimed the No. 2 seed as the regular season concluded, a deep playoff run for Denver hasn’t felt like an inevitability. They went 5-5 in their final 10 regular season games and avoided a first-round upset by the thinnest of margins. A once-comfortable lead was whittled down to just a few points late in Game 7 on Saturday, but the Nuggets held on for the 90-86 victory. They’ll get one day to celebrate before hosting the well-rested Blazers during Game 1 on Monday.

Lillard’s dramatic shot gets the spotlight, for obvious reasons, but that was only one of voluminous makes from downtown for Portland in their first-round series. They lead all playoff teams in 3-point accuracy (40.5%), and they’re tied for second in makes per game (12.8) with only the perimeter-obsessed Rockets ahead of them. Lillard made a ridiculous 5.2 triples on 48.1% shooting from deep, while C.J. McCollum averaged 3.4 triples on 44.7% shooting. Al-Farouq Aminu hit 1.8 per game, Seth Curry added 1.2, and guys like Moe Harkless and Rodney Hood also chipped in from deep.

Those 3-pointers may not come as easy in this series. The Thunder were middle-of-the-pack this season in perimeter defense, allowing opponents to shoot 35.5%, whereas the Nuggets were second-stingiest with just 34.0% allowed. Denver’s opponents shot 1.5% worse than their typical average from deep, which was the best defensive mark in the entire league. In their four regular-season matchups, Lillard struggled with 37.1% shooting including 28.6% from deep. C.J. McCollum was 26.3% from deep and the star’s struggles are a big reason Portland lost the season series 3-1.

This is where Portland’s postseason offense gets very interesting. Partly due to the gravitational pull of their perimeter shooting, they’ve been able to attack the rim with abandon – they attempted 33.8 shots in the restricted area per game in the first round, easily more than any other team (Denver has averaged 22.6). They haven’t been very efficient in the restricted area, with their 51.5% shooting lower than any team beyond Detroit, but that’s forgivable. The point is they’ve achieved very high volume on the shots most prized in today’s NBA – 3-pointers and shots at the rim.

One question is whether Portland can survive without more ball movement. In the instances when San Antonio’s offense stalled out vs. Denver (they were held to 90 or fewer points in two losses), it was often due to an over-reliance on isolation plays. In their five games vs. the Thunder, the Blazers assisted on a mere 43.7% of their baskets. That starts with Lillard, of course, who made 43 unassisted baskets in the series compared to just 10 assisted baskets. For perspective, the second-lowest team this postseason has been Brooklyn at 50.0% assisted. There’s an even bigger gap between Portland and Denver, which has assisted on 65.0% of their makes in the postseason (third-highest behind Utah and Golden State). As talented as Lillard and C.J. McCollum are with the ball in their hands, the Nuggets will probably live with them creating their own shots.

That’s where the supporting cast needs to step up. Maurice Harkless has been excellent in recent weeks, having finally moved past the left knee injury that plagued him most of the season. Al-Farouq Aminu is best suited to crashing the glass when he’s not spotting up for corner 3-pointers, a role he’s filled admirably. The issues arise at center, where Jusuf Nurkic (leg) is unavailable and Enes Kanter is dealing with a separated left shoulder he suffered in Game 5 vs. OKC. He played through the injury and has done on-court work, but his status for Game 1 is still unclear. “I’m not going to lie, [the shoulder] hurts pretty bad,” he said on Saturday. “I mean I’m having a hard time changing my shirt or eating food. So, it’s a process. We’re just taking it day by day, see how it feels.” If the Blazers don’t have Kanter they’ll be down to Zach Collins and Meyers Leonard at center. In any matchup that’s less than ideal. Against Nikola Jokic it might prove ruinous.

For the Nuggets, it all starts with that man in the middle, the Joker himself, Nikola Jokic. He helped finish off the Spurs with a triple-double, his second of the series, which made him the third player in NBA history with multiple triple-doubles in their first postseason appearance. The list is just Jokic and a couple guys named LeBron James and Magic Johnson. He finished the series averaging 23.1 points (48.2% FGs, 86.9% FTs), 12.1 rebounds, 9.1 assists, 1.3 steals, 0.7 blocks and a mere 1.7 turnovers. The list of guys who have averaged at least 23/12/9 in the postseason is even shorter – Jokic and Oscar Robertson.

Jokic was just as impactful in three regular-season games vs. the Blazers, posting 25.7 points on 62.0% shooting, 9.7 boards, 8.0 assists and 1.7 triples. He had a fantastic net rating of +12.6 in those games, highest of any Nuggets player, followed by Torrey Craig (+9.3) and Malik Beasley (7.7). Speaking of which, Denver’s most-used lineup in the first round was the starting core of Nikola Jokic, Jamal Murray, Gary Harris and Paul Millsap – with a mid-series twist.

Will Barton began as a starter but he was very inefficient, averaging just 8.0 points on 33.3% shooting (19.2% from deep), 4.4 rebounds, 1.6 assists and 1.3 turnovers. It wasn’t pretty. He soon gave way to Torrey Craig, who was vastly better at both ends of the court and in the hustle-stats department. With Craig as a starter the Nuggets outscored the Spurs by +12.2 points per 100 possessions, whereas with Barton they were at -3.7. The same ‘core four’ were also terrific in 21 minutes with Malik Beasley as the fifth guy, posting a +17.8 net rating.

That versatility and depth is an advantage for Denver. The only game Denver lost to Portland this season came on Apr. 7, when Denver rested their three leading scorers – Jokic, Jamal Murray and Paul Millsap got the night off. Even without that trio the Nuggets stayed close, falling 115-108, thanks to a balanced attack with six guys in double digits. Head coach Mike Malone continues to play a nine-man rotation in the postseason, with a strong bench featuring Beasley, Barton (better suited to a playmaking bench role, at least right now), Monte Morris and Mason Plumlee. Should the need arise, they could also dust off Isaiah Thomas or Trey Lyles.

Due in large part to Jokic’s dominant presence as a halfcourt playmaker, the Nuggets have had the slowest pace in the playoffs at 93.1 possessions per game. They can get out and run when the need arises, but they’ve settled into a groove predicated on pick-and-rolls that begin with Jokic and Jamal Murray. They’ve had such success that coach Malone recently described their chemistry as “almost romantic.” Gary Harris is a deadly 3-point shooter who can also penetrate with the ball in his hands, Paul Millsap is a tried-and-true post option, and that array of halfcourt options plays nicely in a postseason setting.

Conclusion: The Nuggets aren’t unbeatable by any stretch of the imagination, and the well-coached, star-driven Blazers should make this a tight series. Without Jusuf Nurkic in the middle, however, they’ll struggle to contain Nikola Jokic whether or not Enes Kanter’s shoulder limits him (or forces him to the sidelines). If the Blazers try to swarm Jokic when he catches the ball, he’ll simply lacerate them with his passing. The Nuggets’ superstar is the deciding factor for me in this series, and I expect the Nuggets to advance in six games.