Home / Sports / DeMarcus Cousins has another huge night against Nuggets

DeMarcus Cousins has another huge night against Nuggets 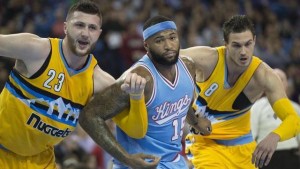 DeMarcus Cousins has soft hands around the rim and deceptively quick ones in the open floor.

No doubt, he had a big hand in this come-from-behind-after-blowing-a-big-lead win.

Cousins scored 39 points, including the go-ahead free throws with 48.3 seconds left, and the Sacramento Kings edged the Denver Nuggets 114-110 on Tuesday night.

The All-Star center came up huge down the stretch, scoring eight of the final 13 points for the Kings, who blew a 17-point lead in the second half before rallying at the finish.

Cousins stole the ball from D.J. Augustin and was fouled on his way to the basket. He made both free throws to give the Kings a lead they wouldn’t relinquish. Cousins preserved the win by stripping the ball away from Darrell Arthur in the final seconds.

It was Cousins’ 53rd career game with at least 30 points, and his second big game against Denver in the past week. Cousins had 37 points, 20 rebounds and four blocks in a 116-110 win over the Nuggets on Friday night.

“We panicked a little bit,” said Karl, whose team has won three straight, including back-to-back wins over Denver. “We got good shots down the stretch, missed a dunk, turnovers hurt us a little bit, but it’s a good win.”

The Nuggets had eight players score in double figures in their fourth loss in five games. Will Barton scored 14 of his 18 points in the fourth quarter, and Danilo Gallinari had 17 points despite a cut on his right hand. Nikola Jokic finished with 13 points, 13 rebounds and six assists.

“We kept fighting to the end,” Augustin said. “That’s something we should be proud about.”

The game appeared to be headed toward a blowout before Denver went on quite a run. It wasn’t until Cousins’ free throws and putback layup that the Kings began to feel a little more secure.

But then Jokic hit a 3-pointer with 10.6 seconds left to make it 111-110. Darren Collinson hit one of two free throws for Sacramento, setting up a frantic finish. The Nuggets dumped the ball down to Arthur, who had it ripped away by Cousins.

“Out of everybody we played, he’s probably the one that I can say that there’s really nothing you can do about him,” Denver rookie Emmanuel Mudiay said.

No surprise, Barton found his rhythm in the final quarter. He is one of the league’s top fourth-quarter scorers, and had nine straight points to help the Nuggets trim a double-digit deficit to 93-86 with 9:20 remaining.

Soon after, Denver had a five-point possession to draw even closer. Augustin stole the ball and was fouled by Omri Casspi. It was ruled Augustin had a clear path to the basket and the Nuggets were awarded free throws — Augustin made both — and then got the ball out of bounds. Barton hit a 3-pointer to make it 93-91 with 8:29 remaining.

Gallinari went to the bench in the second quarter to tape up a healing cut on his hand. He was 5 of 14 from the floor.

Asked if his hand was OK, Gallinari simply said: “Not really, but I’ll say yes.”

Sometimes, Karl wonders what would’ve happened had Gallinari not torn his ACL during the 2012-13 season. The short-handed Nuggets lost a first-round series to Golden State and Karl ultimately lost his job.

“I can’t deny that as some of our coaches and friends have gotten together, we’ve cussed that moment because of what transpired after it,” Karl said.

Kings: This was just the second game in nearly two weeks for Sacramento, courtesy of the All-Star break and another layoff. “We’re OK. We better be OK, because our schedule goes crazy,” Karl said. … Sacramento had some offensive bite back in its lineup with the return of Casspi and Marco Belinelli, who both missed a game because of teeth issues. Casspi finished with 14 points. … Rajon Rondo had 12 assists.

Nuggets: JaKarr Sampson made his Denver debut and didn’t score in limited minutes. He was signed to a multiyear deal Monday after being waived by Philadelphia.