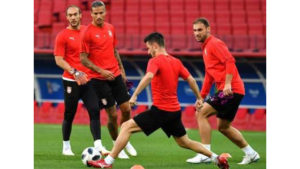 Brazil coach Tite says their off-form superstar Neymar shouldn’t be expected to shoulder their World Cup hopes and yesterday called on the Selecao to keep emotions in check against Serbia today.

Brazil need only a point in Moscow from their final group game to be sure of reaching the knockout stages, while a win is almost sure to put them in the last 16 as Group E winners.

Despite having only just returned from a lengthy layoff after a fractured foot, the world’s most expensive player is the centrepiece of a Brazil side desperate to win the World Cup.

Neymar wept after scoring in their shaky 2-0 win over Costa Rica last Friday and is the subject of constant scrutiny in Russia.

“Neymar is only in the recovery stage,” warned Tite, who says the 26-year-old needs more time to rediscover his form after three months out.

“He is a gifted player, but outside his normal standards, or he wouldn’t be playing like this.

“This is an evolution, if you look at the heat map of his last two games, it has increased considerably.

“Maybe he will be at the top of his game in the next match.

“We shouldn’t place the whole responsibility on his shoulders.”

Back in Brazil, fans crave a first World Cup title since 2002.

However, the South American giants have yet to impress in Russia after drawing 1-1 with Switzerland before needing two late goals last Friday to seal a 2-0 win over Costa Rica.

Neymar cried after scoring Brazil’s second goal in the 97th minute in Saint Petersburg, but Tite warned reporters to not read too much into the superstar’s tears.

Brazil’s inability to keep their emotions in check contributed to their spectacular implosion at the 2014 World Cup, when they were slaughtered 7-1 in the semi-finals by eventual winners Germany.

The fear is the same thing could happen again during the high-pressure knockout stages in Russia.

However, Tite compared Neymar’s tears to his own weeping for joy after Brazil beat Ecuador last August to qualify for the World Cup finals.

“I want to say to the whole Brazilian nation — I cried on the phone to my wife after we beat Ecuador, just because I was happy,” said the Brazil coach tongue-in-cheek when asked about Neymar’s tears.

“I am very careful about associating reasons with emotions.

“There are moments, of course, when you have to have a cool head and to keep a standard.

“We are aware of the emotions and the pressure, we have to be able to assess heart, head and reasoning.

“But emotion isn’t always in sync with imbalance — not at all.”

Serbia captain Aleksandar Kolarov described facing Brazil at the World Cup as the highlight of his career but said his team had no fear and possessed the mental fortitude to force an upset.

“If Brazil are talking about pressure on them, then you can imagine what kind of pressure is on us,” the Roma defender said. “But this is part and parcel of football; we can cope with it.

“I think the mental element, the psychology will be the decisive factor in the match. If we enter with a belief we can win and are mentally prepared to win we will win it.”