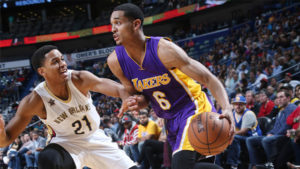 NEW ORLEANS — A rescheduled game this week that forced the Pelicans to play five times in six nights provided Anthony Davis and New Orleans with what would have been a reasonable excuse for fading against a young Lakers squad that was eager to push the pace after two nights off.

Instead, a determined Davis and seemingly rejuvenated Rajon Rondo spearheaded a riveting rally that has lifted them into fourth place in the Western Conference.

Davis capped off a 33-point performance with two clutch free throws and a game-sealing steal in the final seconds, Rondo had 24 points and 10 assists, and the Pelicans erased an 11-point, fourth-quarter deficit to beat Los Angeles, 128-125 on Thursday night.

“We just tried to fight through the fatigue, physically and mentally and just try to pull this one out,” Davis said. “It was hard. I was feeling it for sure. I just wanted to keep pushing.”

Rondo, who turned 32 last month, scored 12 points in the fourth quarter and also assisted on four baskets in the quarter, including two Davis dunks. Rondo’s relentlessness gave him a personal triumph over fellow ex-Celtic guard Isaiah Thomas. Earlier this season, both were ejected after a brief scuffle that stemmed from derisive comments Rondo had made about the Celtics’ plan earlier this season to honor Thomas with a video tribute. The tribute never happened because Thomas was traded from Cleveland to the Lakers.

Rondo did not take questions in the locker room after the game, but Davis grinned knowingly when he said, “I think he had an extra little momentum tonight, for whatever reason, but he played out of his mind.”

In a radio interview before he left the court, Rondo said, “We found a way. It wasn’t easy. We made it a little more difficult than we wanted to. … You give me this group of talent, I never feel like we’re out of any game. We stayed poised.”

New Orleans, which had a game against Indiana rescheduled for Wednesday because of a roof leak that postponed a game in February, became the first team since Seattle in 1979 to win three home games on consecutive nights, starting against Dallas on Tuesday. New Orleans has won four straight since beating Boston on Sunday and 15 of 19 since Feb. 10.

Kentavious Caldwell-Pope tied a career high with eight 3s and finished with 28 points, but did not get a shot in the Lakers’ final few possessions. Instead, Lonzo Ball missed two 3-point attempts and Julius Randle — who had 23 points and 10 rebounds — missed a driving floater from about 7 feet.

“I want a point guard who has the courage to step up and take those, even after missing a few,” Lakers coach Luke Walton said Ball’s late perimeter attempts. “None of those were forced. They were open 3s in rhythm. We believe in what he’s going to do for us in our future and he’s shown, at times, this year what he’s going to be.”

The Lakers tried to get Caldwell-Pope a chance at a tying 3 in the final seconds, but two Pelicans defenders quickly converged. Caldwell-Pope tried to pass instead, but Davis intercepted to send the Lakers to a fourth straight loss.

Lakers: Brook Lopez scored 23 points, Kyle Kuzma 22 and Thomas 15. … The Lakers tied a season high for points in a first half. … Shot 17 of 39 from 3-point range. … F Channing Frye was active for the first time since his appendectomy on Feb. 16, but did not play.

Pelicans: Jrue Holiday had 26 points on 12-of-16 shooting, while E’Twaun Moore and Ian Clark each scored 13. … New Orleans shot 54.7 percent (52 of 95) and scored 80 points in the paint after coming in averaging 51.6 points in the paint, which ranked second in the NBA. … Playing in only his third game this season, Solomon Hill played his most minutes yet with 13 and hit a 3-pointer. … The Pelicans made only 6 of 24 3-point attempts.

There were 19 lead changes and 15 ties in a high-scoring first half.

Caldwell-Pope made his first five 3-point shots, spurring the Lakers to a 44-point first quarter, the most points allowed in any quarter by New Orleans.

The Pelicans led 71-69 when Davis converted a lay-up on an alley-oop lob from Moore with 2:26 left in the second quarter, but the Lakers responded with Lopez’s dunk and short jumper to go up 73-71 at halftime.

“Our commitment to defense was awful,” Walton said. “It was just a `Let’s shoot it out and see who scores more.’ It might be fun for the fans and maybe for the players even, but it’s not up to the standard that we hold for ourselves.”

Lakers: At Memphis on Saturday night.

Pelicans: At Houston on Saturday night.

Check out the team sites for the Los Angeles Lakers and the New Orleans Pelicans for more game coverage.