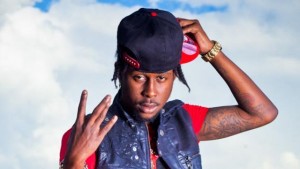 KINGSTON, Jamaica – Jamaican dancehall artiste Popcaan was last night arrested in Antigua after a raucous scene erupted on stage at the Antigua Trades and Labour Union rally in Fort James. Popcaan, whose real name is Andre Sutherland, was the featured act for the night, the Antigua Observer reports.

The conflict reportedly began when a number of supporters climbed onto the stage and a police officer began removing them. The Antigua Observer cited a video of the incident, which showed the artiste intervening, saying on the mic, not to handle the patrons “so rough” and physically separated a patron from the police officer who reportedly reacted by strongly pushing Popcaan.

Another police officer reportedly intervened to calm the police officer. After Popcaan left the stage, it is alleged that a further conflict occurred and patrons began throwing bottles onto the stage. Popcaan was subsequently arrested. In a further video the artist – while being escorted by police officers into a motor vehicle – can be heard accusing the police of breaking open his mouth, Antigua Observer says