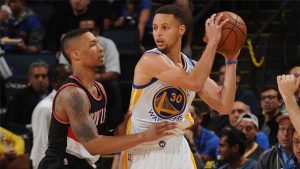 KD finds plenty of things in the MVP’s game to praise, too. And when these two get clicking together, the Golden State Warriors are oh so good.

It just took a while Wednesday night.

“It’s pretty special, I didn’t realize it at first,” Curry said of KD’s ability to light up a stat line on minimal shot attempts. “He’s a super-efficient player and he takes pride in that.”

CJ McCollum scored 35 points to lead a Portland team still without Damian Lillard, and the Trail Blazers certainly had to feel better about hanging tough in this one after their forgettable 45-point defeat here 2 1/2 weeks earlier.

Curry shot 12 for 25 on a night Splash Brother Klay Thompson struggled to find his stroke from long range, going 1 of 7 and scoring 14 points.

Durant was dominant on both ends, especially during one spectacular sequence late in the first.

He made a pretty driving lay-in and converted a three-point play at the 2:50 mark, blocked two shots in succession moments later — one against McCollum then on Noah Vonleh’s putback try. KD drained a 3-pointer the next time down, and he also had a four-point play in the final minute of the first half.

“He’s been amazing, and it’s not just rim protection,” said Green, who challenged Durant “to fly around” on defense.

McCollum made three of his first six 3s then missed four of five in the second half, when he shot 3 for 12.

“I just missed some shots. It happens,” he said. “I had a lot of good looks from 3 that I didn’t make and I missed a couple layups. Credit to them, they did a good job defensively.”

Four Golden State starters hit 3-pointers among the Warriors’ first four baskets before the game was even three minutes old.

The Warriors’ five straight wins against the Trail Blazers mark their first five-game winning streak versus Portland since winning seven in a row from Feb. 20, 2005 to Nov. 3, 2006.

Golden State also has won six straight in the series at home. That includes the blowout victory Dec. 17 — 135-90 — for the biggest margin by Golden State in the series and matching the largest point disparity in any game played between the rivals with Portland’s 136-91 win on Dec. 22, 1987.

Already fined $25,000 in November for his remarks on traveling, Warriors coach Steve Kerr shared how he texted Lakers coach Luke Walton on Tuesday night regarding a play by Grizzlies guard Mike Conley.

Once he’d said it, he begged NBA president of basketball operations Kiki VanDeWeghe not to penalize him again.

“Mike Conley took like five steps on the play and got an and-1. It was like, `Not only are we going to let you to travel, we’re going to give you the benefit of that touch at the end, too.’ It’s like, `All right, we have to adapt to that,” Kerr said. “… So, again, Kiki if you’re listening, it’s just an observation, it’s not a complaint. Don’t fine me.”

Trail Blazers: Coach Terry Stotts was hopeful of having his leading scorer return for the second game in a back-to-back Thursday at home against the Lakers. “He’s moving around better,” Stotts said. … Already through three of four regular-season meetings with Golden State, Portland hosts the last one Jan. 29.

Warriors: Curry and Durant scored at least 25 points in the same game for the 10th time. … Golden State had its NBA-leading eighth 40-point quarter in the first. … Durant had the Warriors’ second four-point play after Curry’s on Nov. 10 at Denver.

Trail Blazers: Host the Lakers on Thursday in the first of four meetings between the teams.

Check out the team sites for the Portland Trail Blazers and the Golden State Warriors for more game coverage.