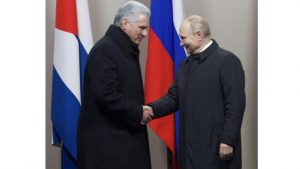 In a speech today at the State Duma in Russia, Diaz-Canel called for peaceful negotiations to take place between Russia and Ukraine to resolve the conflict.

Diaz-Canel, who is on a state visit to Russia, said Cuba will continue to be a strong ally of Moscow in the face of Western imperialism and aggression.

Meanwhile, the leaders of Russia and Cuba have agreed to strengthen ties between both nations.

President Vladimir Putin and Diaz-Canel unveiled a bronze statue of former Cuban President Fidel Castro at a square named in his honour in northwestern Moscow.

Putin told Diaz-Canel that he was impressed with Castro, whom he met on several occasion, and his understanding of the world.

“My memories are still fresh of how impressed I was when we met for the first time at his office. It was a rather casual rendezvous. We had lunch together and discussed current world affairs. I was very surprised by his thorough knowledge of the details and nuances of what was happening around the world, in some cases quite far away from Cuba,” Putin said

“It was very interesting and useful for me to have these meetings. I still remember the slightest details of our personal encounters with him. He was a bright man.”

Putin said the statue was a fitting tribute to the late Cuban president.