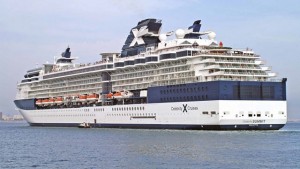 Virgin Islands News Online reports that the accident involved passengers from the Celebrity Summit who were travelling on an excursion to local beauty spot Cane Garden Bay Beach.

According to the report, the excursion bus apparently lost control near Round Hill on the Cane Garden Bay Hill.

The road was reportedly steep and wet, but no further details of the accident were provided.

Two passengers were pronounced dead at the scene, while others were transported to nearby Peebles Hospital.

“First responders, including the Royal Virgin Islands Police Force, Fire and Rescue Department, (and) medical personnel were mobilized, along with members of the BVI Tourist Board, and cruise ship personnel from the Celebrity Summit cruise line, to provide assistance to the visitors involved,” according to a statement from the office of Premier of the British Virgin Islands Orlando Smith.

Royal Caribbean Cruises Ltd., the parent company of Celebrity Cruises, said on its Twitter account that the Summit’s captain was at the hospital visiting injured passengers.

Celebrity Cruises released the following statement: “We are saddened to report the deaths of two Celebrity Summit guests after a local bus accident late this morning in Tortola.

“Our ship’s captain and others have gone to the hospital in order to help respond to this terrible incident, and our response is being coordinated with local officials and our Miami headquarters.

“Local officials tell us that there were 20 passengers on the bus, 16 of whom suffered injuries. In addition to the two fatalities, officials have told us there were also two critical injuries. Several of the injured guests have been treated and released, and will rejoin the ship shortly.

“The bus was independently operated, and not part of any Celebrity-sponsored shore excursion. We will refer questions about the accident and its investigation to local authorities.”

Tortola was the first stop on a seven-night cruise that left Saturday from San Juan, Puerto Rico.

According to Cruise Law News, this is not the first time that cruise passengers from Celebrity’s Summit have been seriously injured in an excursion vehicle mishap in the Caribbean.

In 2009, a dozen passengers from Celebrity Cruises’ Summit were seriously injured when an open air excursion vehicle ran off the road in Dominica. The injured visitors were subsequently airlifted to Miami.