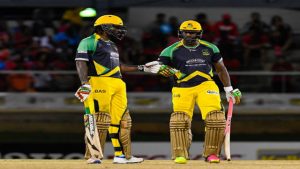 KINGSTON, Jamaica – The Jamaica Tallawahs completes an impressive quadruple of wins at home in the Hero Caribbean Premier League (CPL)Twenty20 tournament after defeating Barbados Trident by 36 runs in their final fixture at Sabina Park on Wednesday.

After being piloted to a mammoth 195-5 from their 18 overs in the reduced fixture by opening batsman Chadwick Walton, the Tallawahs restricted the Tridents to 159 all out in 17.4 overs.

Young wicketkeeper/batsman Nicholas Pooran with a well-played 51 off25 balls was the only batsman to offer any resistance in the Tridents lukewarm chase. Pooran slammed one four and six sixes in his knock, with Captain Kieron Pollard making 16 as the next best scorer.

South African pace ace Dale Steyn continued fine form with the ballgrabbing four wickets for 27 runs from his four overs in this farewell fixture for the Tallawahs. American Timroy Allen took two for 27 from three overs, while Captain Chris Gayle, Andre Russell and Kesrick Williams had one wicket each.

Earlier, after losing the toss for the third consecutive game and being asked to take first strike, Walton slammed an impressive 97 off 55 balls to anchor the Tallawahs innings.

Walton was involved in an entertaining 127-run second wicket partnership with Sri Lankan wicketkeeper/batsman Kumar Sangakkara, who got to a well-paced 50 off 31 balls. Walton’s knock includes nine fours and five sixes, while Sangakkara had four fours and two sixes in his innings.

Young superstar Rovman Powell continued his rich vein of form with a blistering unbeaten knock of 34 off 14 balls that had one boundary and four big sixes. Pacer Ravi Rampaul was the pick of the Tridents bowlers with two for 35 from four overs, while South African pacer David Wiese also had two for 45 from his four.