Cornwall takes spectacular seven to give Windies the edge 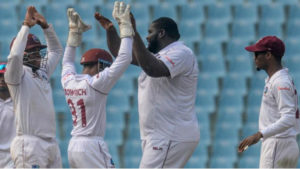 Afghanistan failed to capitalise on an encouraging start to the inaugural Test against West Indies as spinner Rahkeem Cornwall took seven wickets on day one.

Cornwall claimed magnificent figures of 7-75 in only his second international as Afghanistan were bowled out for 187 at the Ekana Cricket Stadium in Lucknow, having been 84-1 at one stage.

The Windies recovered from the loss of two early wickets in reply, closing on 68-2 with John Campbell and Shamarh Brooks the unbeaten batsmen.

Ibrahim Zadran (17) struck three boundaries before being caught in Cornwall’s second over by Jason Holder at leg slip following a successful appeal that left the batsman seething after the Windies won the toss.

Ihsanullah (24) and Javed Ahmadi (39) were going along well before the latter sent an over-confident drive off Jomel Warrican straight to Brooks.

Ihsanullah then edged to Shai Hope as Cornwall sparked a sudden collapse, leaving Afghanistan in the mire on 111-7 after losing six wickets for just 27 runs.

Cornwall’s first-innings figures were the best by a West Indies spinner since Jack Noriega’s 9-95 back in 1971.

Hamza trapped Kraigg Brathwaite (11) lbw and Rashid Khan led the celebrations when Hope fell for the loss of just seven, leaving the Windies 34-2 and feeling some early pressure in their first innings.

However, Campbell (30) and Brooks (19) steadied the ship with seven boundaries between them and will look to press on when they resume on Thursday.