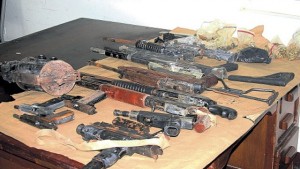 The weapons and assorted ammunition recovered by Trelawny cops yesterday.

FALMOUTH, Trelawny — The Trelawny police have taken two men into custody in connection with the recovery of 11 illegal firearms, a rocket launcher and more than 300 rounds of assorted ammunition which were hidden in a barrel being transported by a pickup yesterday.

According to Deputy Superintendent of Police Odean Dennis, yesterday about 10:00 am, members of the Trelawny Highway Patrol were on a stop-and-search operation on the Scarlett Hall main road in the parish when the driver of a motor vehicle was ordered to stop.

A search of the vehicle yielded:

* a Uzi and an Intratech sub-machine gun; and

The names of the two persons taken into custody have been withheld pending further investigation.

Meanwhile, yesterday’s arms recovery brings to 16 the number of illegal guns recovered by the Trelawny police since the start of the year.

Deputy Superintendent Dennis, who is the crime officer for the Trelawny Police Division, argued that had it not been for the vigilance of the police, the weapons would have slipped through the police dragnet as motorists signalled the presence of the police to the driver of the motor vehicle transporting the illegal weapons.

He pleaded with motorists to desist from flashing their headlights to notify oncoming motorists of the cops’ presence on the road.

“We just want to get across to the public… to stop this practice. Because, from our information, persons would have given the light to these persons who were travelling in the vehicle and they made an effort to elude the police. If it wasn’t for the alertness of the police, then they would have been able to slip through the police dragnet,” DSP Dennis said.

“I just want to let the public know that this practice is very dangerous, as these are the kinds of things that you can allow to pass the police if you continue this practice,” he added.