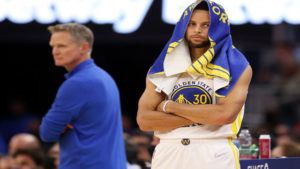 Steph Curry and the Warriors lost 116-109 to the Miami Heat on Tuesday night at FTX Arena, but they might have been able to pull out a close win if not for an overturned foul call that negated three free throws that potentially could have tied the game late in the contest.

As the Warriors trailed 112-109 with 1:39 remaining in the fourth quarter of Tuesday night’s loss to the Heat, Curry’s 3-point shot attempt came up short after Miami forward Jimmy Butler appeared to make contact with Curry who was in the act of shooting. Butler initially was called for a foul, which would have sent Curry to the line to potentially tie the game with three free throws, but the call was overturned to a block. The Heat were awarded the ball.

If the call had stood, Curry, who is a 90.9 percent shooter from the free throw line in his career, likely would have tied the game and given Golden State a shot to pull out a late win.

“Steph Curry clearly got hit on the wrist, on the arm on his follow-through,” Mullin said on “Warriors Postgame Live” after the loss. “So I’d really like to see when the league comes out with their report what the rule is, because as far as I’m concerned, he shot the ball, he’s still in his follow-through and Jimmy Butler smacks him in the arm. I’ve never not seen that called a foul, especially after the review.”

In speaking to reporters after the game, Warriors coach Steve Kerr was not surprised that the call was overturned.

“I didn’t get a good enough look at it,” Kerr said. “Usually if a guy gets the ball first on a block, then anything goes. I expected that one to be overturned.”

Of course, there is no guarantee that Curry would have made the three free throws and that the Warriors would have gone on to win, but unfortunately for Golden State, they never had the opportunity after the play.

The Warriors (3-5) now have lost three straight games and have dipped two games under .500 with two games left on the road trip.