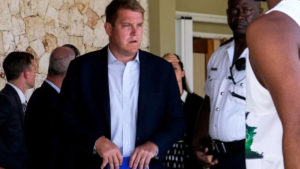 The Connecticut banker who failed to return to Anguilla on Monday to face charges he killed a hotel worker there is “at peace” with his decision, his wife told The Post.

“As stressful as the past week has been, we are happy we followed the advice of our legal counsel and confident we made the right decision for Scott and our family,” Kallie Hapgood said of her husband.

Scott Hapgood opted to stay home in Darien rather than appear Monday in court and risk the possibility of being jailed while waiting “two years for trial to begin,” she said.

Hapgood, 44, has been out on bail and home in Connecticut since he was charged with manslaughter in the April death of Kenny Mitchel, 27. Hapgood claims he was acting in self-defense after Mitchel came to his room at the Malliouhana resort, pulled a knife and demanded cash.

A judge on Monday was set to decide if the case would go to trial, but Hapgood feared his bail could be revoked.

“Anguillian officials also told us throughout this process they could not guarantee Scott’s safety, which is not surprising considering the threats we’ve received on social media and the taunts of prisoners in jail that they planned to ‘bash his head in,’” Kallie said.

Authorities initially said Mitchel died of prone restraint, positional asphyxia and blunt force trauma, but a revised toxicology report later showed he had a potentially lethal amount of cocaine in his system.

“A bench warrant will be sought from the High Court Judge for his arrest,” he said. “When this is shortly obtained this will be circulated through Interpol to police forces around the world.”

The US has an extradition treaty with Anguilla through its agreement with the UK, which would have to sign off on the arrest warrant.

“My understanding is that there is a whole layer of international processes, so it would be hasty and very oversimplified just to say just because there is an order it entitles someone to go pluck somebody from their home,” lawyer Juliya Arbisman told The Post.

Hapgood and his lawyers declined to say if he would ever return to Anguilla.