Home / Regional / Concerns linger as Guyanese go to the polls

Concerns linger as Guyanese go to the polls 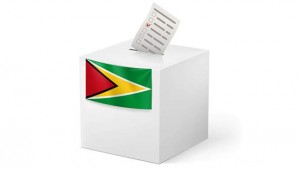 GEORGETOWN, Guyana, Monday May 11, 2015 – After a weekend of final campaigning from the country’s main political parties, Guyanese will head to the polls this morning to elect a new government, amid concerns that the losing side and its supporters might not accept the result.

A total of 570,787 voters are registered in the election that is expected to be a straight fight between the ruling People’s Progressive Party/Civic (PPP/C) and the coalition of A Partnership for National Unity (APNU) and the Alliance for Change (AFC).

The parties Saturday night held rallies to fortify their supporters and convince undecided voters that they were the right choice.

While president Donald Ramotar is confident of continuing his PPP/C’s reign, presidential candidate of the APNU and AFC alliance Brigadier David Granger has predicted the alliance will get 58 per cent to 62 per cent of the vote, ending the PPP/C’s 23-year rule and winning a majority in the National Assembly.

Even before a vote was cast, the umbrella body for private sector entities in Guyana expressed concern that neither party was prepared for a loss.

“We are concerned about parties’ willingness to accept the results at the end of the elections,” said chairman of the Private Sector Commission Ramesh Persaud, while vice-chairman Edward Boyce urged Guyanese not to resort to violence, regardless of the outcome.

Several international groups are observing the election which is expected to be keenly contested, including the Carter Center of Democracy, which has already expressed similar concerns.

The director of the center’s Democracy Program, David Carroll, said the election was likely to be very competitive and “depending on the quality of the electoral process, there might be reluctance to accept the results”.

“It will be an important test for Guyana and its people,” he said.

The Carter group had been personally led on the centre’s 100th observer mission by former United States president Jimmy Carter.

However, the 90-year-old left the country yesterday after feeling unwell, a statement from the center said. The nature of his sickness was not specified. The other members of the mission remain in Guyana.

The other observer missions, including from the Caribbean Community (CARICOM), the Union of South American Nations (UNASUR), and the Organisation of American States (OAS) have all called for elections to be free and fair.

Chairman of the Guyana Elections Commission (GECOM) Dr Steve Surujbally said that body had been able to achieve an “almost perfect state of readiness” for the efficient and transparent conduct of the election.

GECOM has promised to deliver the results in the fastest time possible, but Surujbally insisted that it would not sacrifice accuracy in the process.