Committee to investigate allegations of racism in Zimbabwe cricket 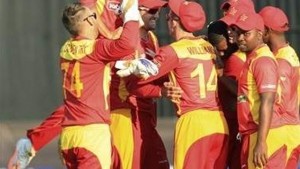 STAY UP ZIMBABWE: Zimbabwean players celebrate after beating India in their Twenty20 cricket match in Harare, Zimbabwe, on Sunday.

Zimbabwe’s cricket board said yesterday it was investigating allegations of racism made by senior player Prosper Utseya against the board’s managing director and former national team captain Alistair Campbell.

Utseya’s accusations were made in a letter to the board in which he claimed Campbell was behind his own recent omission from the team.

Utseya, who is black, also claimed Campbell, who is white, favoured whites ahead of blacks when it came to appointing the captain of the national team and coaching staff.

A committee had been set up to look at Utseya’s allegations, Zimbabwe Cricket chairman Wilson Manase said. He said Utseya’s letter had been sent to the board “a long time ago.”

“We must treat this carefully and rest assured the board is handling it,” Manase said. “We must find a way to resolve this to make sure that everyone involved in the game remain at one. We don’t want to bring divisions that are not warranted.” Utseya declined to comment to The Associated Press, saying his letter was not meant to be made public.

He reportedly sent his letter soon after the World Cup in February and March in Australia and New Zealand, where he didn’t play a game for Zimbabwe.

However, Utseya was a surprise inclusion in the Zimbabwe squad for the showpiece tournament anyway after being banned from bowling his offspinners by the ICC last year because of an illegal action.

One of Utseya’s accusations against Campbell was that the managing director had made comments in the media that undermined the player with regard to his bowling.

Utseya has since returned to the team and was picked for the latter part of India’s limited-overs tour to Zimbabwe this month. His letter emerged on Saturday, a day before Zimbabwe beat India in the second Twenty20 international to draw the series 1-1, giving the struggling African team a major boost. Utseya played in that game.

The 30-year-old Utseya is a former Zimbabwe captain and has played 162 one-day internationals, making him one of the most experienced players on the team.

But he has also been involved in other controversies. Zimbabwe’s former player representative, Eliah Zvimba, claimed that Utseya was involved in forcing him out of his job.