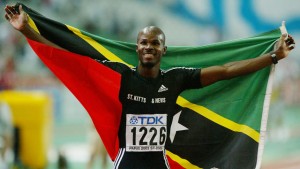 St Kitts & Nevis International sprinter Kim Collins said he could retire at the end of the 2016 season.

Former world 100-meter sprint champion Kim Collins has hinted that he could retire at the end of the 2016 International track & field season.

The St Kitts & Nevis athlete made the revelation during an interview with host of the Good Morning Jojo sports show, Joseph “Jojo” Apparicio, on Observer Radio on Tuesday.

“I want to go one more year, next year, at 40. I will be done, over, I think that’s it. My body feels great and I feel like I could go another five years, but I say one more. I want to finish when Kim Collins wants to finish and not when other people say,” he said.

Having competed in six Olympics, 10 World Championships and three World Indoor Championships, Collins said the time has come to focus on other aspects of life.

“The early days of the training, like now, is the hard part. Once you get into January and start competing then you’re good, but it’s just that it gets lonely sometimes being out there … that’s the difficult part, being away from your family and your loved one for so long. Sometimes, I would be away for like four months straight in the summer and two months in the winter and that’s six months in the year that you are gone,” the sprinter said.

Collins won the 100 meter event at the 2003 World Championships in France where he clocked 10.07 to beat Darrel Brown of T&T and Darren Campbell of Great Britain.

He was honoured at the CASI Awards held here in Antigua two weekends ago.