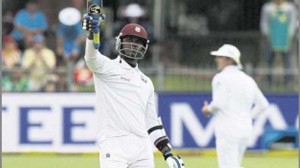 An abysmal but now familiar collapse, tarnished high quality hundreds by Kraigg Brathwaite and Marlon Samuels, as West Indies’ hopes of mounting a serious challenge in the second Test against South Africa, all but faded on the penultimate day in Port Elizabeth Monday.

Cruising at 231 for two in the second session, West Indies capitulated to lose their last seven wickets for 44 runs, to stumble to 275 for nine at the close of another rain-hit day at St George’s Park where only 35 overs were possible.

The collapse took the shine off the gallant efforts of Brathwaite who stroked 106 and Samuels, who hit 101, as they imposed West Indies’ presence on the game with a 176-run, third wicket partnership.

Brathwaite, in only his 16th Test, faced 186 deliveries in 287 minutes and registered 12 fours, as he fashioned his third Test hundred and third in his last six Tests.

Samuels, meanwhile, completed his sixth Test hundred – a fascinating knock that consumed 160 balls, in 203 minutes and included 14 fours and a six.

However, both fell within the space of four deliveries to trigger a collapse, as West Indies lost their way in the evening session. They were 245 for four at tea but lost five wickets for 34 runs in ten overs after the break.

When rain drove players from the field at 4:30 pm, the West Indies were 142 runs behind South Africa’s first innings of 417 for eight declared, and still in danger of losing the game with a day left in the contest.

Resuming the day on 147 for two, West Indies flourished through the enterprise of Brathwaite and Samuels who played positively against the pair of Morkel and Philander.

Ramdin hit a couple of boundaries before missing a Tahir googly and falling lbw for 20, to continue a slump that has seen him gather 43 runs from his last five innings.

Two balls later, Chanderpaul pulled Tahir onto his stumps to depart for seven at 261 for six, and Jason Holder (1), Sulieman Benn (4) and Kenroy Peters (0) all followed him in quick fashion, as the West Indies’ demise took shape.