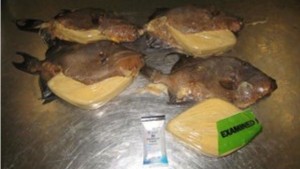 Cocaine was found in fried fish from Jamaica at the Miami Airport. (US Customs image)

Officers at the Miami International Airport seized over 2 pounds of cocaine concealed inside fried fish Saturday in the luggage of the passenger, whose name has not been released.

During an X-ray examination of the passenger’s luggage, CBP OFO officers at the airport noticed anomalies in some of the cooked fish. Upon further examination the officers observed that the bellies of some of the fish were sewn together and certain fish felt thicker than the rest. CBP OFO officers discovered approximately 2.3 pounds of cocaine and subsequently seized the illicit substance.

“CBP officers are an instrumental part of the detailed inspection process designed to detect illegal narcotics entering the United States,” said Miami International Airport Port Director Christopher Maston. “Drug smugglers are using increasingly innovative methods and this interception is an excellent example of how our highly trained officers continue to use their experience and knowledge to detect and interdict the flow of illegal narcotics.”

CBP officers and agents seized more than 3.8 million pounds of narcotics across the country in Fiscal Year 2014.