‘Coffins Are Already Coming’: The Toll of Russia’s Chaotic Draft 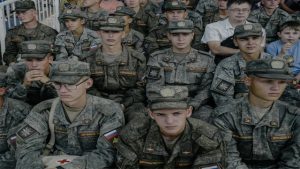 A half-dozen Russian soldiers talk about being shipped to an area of intense fighting in eastern Ukraine just 11 days after their mobilization. Asked about his shooting practice, a bearded conscript says, “Once. Three magazines.”

In a town near Yekaterinburg, in central Russia, newly mobilized men march in place in their street clothes. “No machine guns, nothing, no clothes, no shoes,” says an unidentified observer. “Half of them are hungover, old, at risk — the ambulance should be on duty.”

“This is not how it’s done,” a woman named Elena told the news outlet Samara Online. “We buy everything.”

Despite draconian laws against criticizing the “special military operation” in Ukraine, Russian social media is awash with scenes such as those above captured in widely circulating videos. Such posts are taking the Ministry of Defense to task for acting just as Western military experts predicted: rushing thousands of newly drafted, untrained, ill-equipped soldiers to Ukraine, too desperate to plug holes in its defensive lines to mold the men into cohesive units.

“They are giving them, at best, basics and, at worst, nothing and throwing them into combat, which suggests that these guys are just literally cannon fodder,” said William Alberque, a specialist in the Russian armed forces and the director of the arms control program at the International Institute for Strategic Studies, a research organization based in London.

An extreme sign of disorder came Saturday, when two men from a former Soviet state opened fire at a Russian training camp. They killed 11 volunteers and wounded 15 before being shot dead, Russian outlets reported.

Inevitably, some draftees have already been killed or captured, stirring ever-harsher criticism of the mobilization effort announced Sept. 21 and considered a shambles from the start.

In theory, the draft was of men in the reserves with military skills that needed refreshing, but in practice, it pulled in virtually anybody, critics said.

“The result of the mobilization is that untrained guys are thrown onto the front line,” Anastasia Kashevarova, a military blogger who has supported the war, wrote in an angry post, one of several such broadsides.

“Chelyabinsk, Yekaterinburg, Moscow — zinc coffins are already coming,” she added. “You told us that there would be training, that they would not be sent to the front line in a week. Were you lying again?”

Thus far, the Kremlin has tolerated criticism of the conduct of the war, while jailing or fining those who questioned any need for the invasion. But there were rumblings this past week that it should crack down on military critics, too.

On Friday, Russian President Vladimir Putin confirmed at a news conference that 16,000 recruits had already been deployed to combat units, some with as few as five to 10 days of training. The recruits were sorely needed, given that the front in Ukraine stretched for nearly 700 miles, he said, adding that the training would continue there.

Evidence of the lack of training is anecdotal, but the sheer number of videos from across Russia, along with scattered threats from draftees to strike over the conditions, other news reports and commentaries, underscores the depth of the problems.

In a widely circulated video, a recruit from Moscow assigned to the 1st Tank Regiment — a storied unit hit hard early in the invasion — said the regimental commander had announced there would be no shooting practice or even theoretical training before the men deployed.

Another video showed a group of about 500 disheveled men, most of their faces covered by balaclavas, standing by a train in the Belgorod region, near the border with Ukraine. The narrator said they had not been assigned to specific units, had lived in “inhuman conditions” for a week, had to buy their own food and lacked ammunition.

The Belgorod governorate announced that most of the men would be returned to central Russia for additional training. Even Roman Starovoit, governor of the neighboring Kursk region, decried the training conditions. He described ruined canteen buildings, rusty or broken showers, and a lack of beds and uniforms. “In some places it’s OK, and in some places it is just awful,” he said on social media.

On Thursday, another governorate, Chelyabinsk, was among the first to officially announce the deaths of untrained soldiers, with five killed in eastern Ukraine. The announcement did not detail the circumstances, but the BBC’s Russian service quoted friends and relatives of the men as saying they were deployed “like meat” without combat training.

Similarly, the 28-year-old head of a department in Moscow’s city government, Aleksei Martynov, who lacked combat experience, was killed in Ukraine just days after being mobilized, Natalya Loseva, a journalist with the state-run RT television channel, reported on Telegram. Her report could not be independently confirmed.

“The Russian military leadership is continuing to compromise the future reconstitution of the force by prioritizing the immediate mobilization of as many bodies as possible for ongoing fighting in Ukraine,” the Washington-based Institute for the Study of War said in a recent assessment. A report from Britain’s Ministry of Defense seconded that evaluation, stating: “The failure of Russian crews to destroy intact equipment before withdrawing or surrendering highlights their poor state of training and low levels of battle discipline.”

Not surprisingly, Russian officials are seeking to put a positive spin on the call-up. Russian Defense Minister Sergei Shoigu announced that 200,000 recruits were preparing at about 80 training grounds and six educational centers. Putin called a halt to the unpopular mobilization, saying 220,000 conscripts would be enough, rather than the initially announced target of 300,000.

The number of Russian troops in Ukraine remains murky. An estimated 200,000 soldiers were deployed for the invasion, but Western intelligence agencies say that anywhere from one-third to one-half have been killed or wounded.

The Defense Ministry has pumped out a stream of videos showing happy “mobiks,” as the recruits are known in Russian slang, learning to shoot, attack tanks, tie a tourniquet, plant a land mine and other military tasks.

“In general, the personnel are fully equipped, ready for combat operations and eager to join the ranks of combat units and to destroy the enemy,” said a soldier identified only by his first name, Magomed, in a Ministry of Defense video shot at a training ground somewhere in or near eastern Ukraine.

An injection of hundreds of thousands of draftees might stop Ukrainian advances in the short term, but military analysts said Russia would struggle to reverse its fortunes in the months ahead. “The Russians will have to make a choice — build a unit properly over time and then risk losing the war, or using that unit now because the war demands it, but the unit will be half ready,” said Johan Norberg, a Russia analyst at the Swedish Defense Research Agency.

Russia’s lines in eastern Ukraine have collapsed repeatedly under the onslaught of better-trained, better-motivated soldiers. Analysts say the Russian military has a glaring lack of cohesive units in which infantry, artillery and air power are trained to work together.

Andrei Gurulev, a hard-line deputy in the federal Parliament and a senior officer in the reserves, wrote on Telegram that it would take at least one or two months before Russia could deploy trained units. Others suggested it would take until the winter. Some Russian military cadets are being released early to become officers, the Ukrainian general staff reported.

The Soviet Union maintained a permanent military training infrastructure, which was dismantled after its collapse in 1991. With the start of the war, military trainers were shipped to Ukraine, leaving units struggling to fill the gap with veterans or teachers from military academies.

“They have lost a lot of military specialists,” said Gleb Irisov, a Russian air force veteran and former analyst for state-run news agency TASS. “There is nobody to train these new people.”

Even before the war, Irisov and others noted, Russia struggled to train its two classes of about 100,000 conscripts every spring and fall, with reports of problems such as ill-fed troops.

“The system of military training is very weak and has been that way for a long time,” Irisov said. Much of the training appeared only on paper, he said. “They could not manage to do this in peacetime, so in wartime, it is even more difficult.”

Unexpectedly, some of the most concentrated training is happening in the Donbas, the area of eastern Ukraine that has been inflamed by war since Russia ignited a separatist movement there in 2014.

In the spring, men in the Donbas were being snatched off the streets and dispatched directly to the front lines. But amid the carnage, attitudes shifted, said Kirill Mikhailov, a researcher at the Conflict Intelligence Team, an organization founded in Russia to track conflicts involving Russian troops. Officials in the region realized that they had “squandered their manpower for little gain,” he said, and so they knew they would need to make better soldiers out of the Russian recruits.

For the moment, however, with thousands of recruits pouring into Ukraine, it appears that the Kremlin is emphasizing quantity over quality. Or, as Norberg put it, citing a Russian expression, “Not with skill, but with numbers.