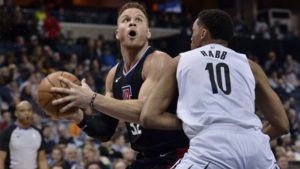 Blake Griffin, left, averaged 22.6 points in 33 games for the Clippers this season.

The trade brings Griffin — a potential MVP candidate when healthy — to an underachieving Pistons team that is 22-26 and three games behind Philadelphia for the eighth playoff seed in the Eastern Conference. Griffin, who last June signed a maximum five-year, $173 million contract to return to the Clippers in free agency, averaged 22.6 points, 7.9 rebounds and 5.4 assists in 33 games this season. He is a four-time All-NBA player.

Griffin has evolved from a rebounding, interior post presence to a more perimeter-oriented player, averaging 5.7 3-point attempts this season and connecting on 34.2 percent of them.

Harris and Bradley are established high-level rotation players, and Marjanović has shown promise as a reserve big man. Harris has averaged 18.1 points and 5.1 rebounds this season. Bradley, a free agent at season’s end, has averaged 15 points and 2.4 rebounds this season. This deal could be the start of a swift rebuild for the Clippers, which could include finding a trade partner for free-agent-to-be DeAndre Jordan.