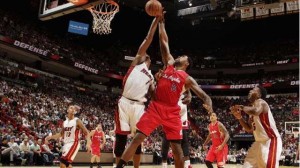 MIAMI — Late in the third quarter, Blake Griffin and Chris Paul found themselves all alone on a fast break, no Miami Heat player even remotely close to them.

Everything wasn’t always that easy for the Los Angeles Clippers.

It only seemed that way.

Paul had 26 points and 12 assists, Griffin added 26 points and the Clippers wasted no time in taking control on the way to a 110-93 win over the Heat on Thursday night.

“We’re doing what we’re supposed to do,” Paul said.

DeAndre Jordan scored 12 points and grabbed 11 rebounds for the Clippers (7-4), who led 39-15 after one quarter. Jordan’s night: Six shots, all of them dunks, all part of the reason why the Clippers outscored Miami 44-26 in the paint.

“I think that’s rare,” Clippers coach Doc Rivers said of Jordan’s all-dunk night. “That might not be for him. … He’s the perfect guy to have on a winning basketball team.”

Chris Bosh scored 28 for Miami (6-6), which has dropped three straight home games for the first time since March 3-8, 2011. Rookie reserve Shabazz Napier had a season-high 17 points.

“We didn’t have a chance tonight after that first quarter,” Bosh said. “Good team like that, down 20, you can’t do that. We can’t do that. We’re not good enough to keep making mistakes. … It was a clinic they put on us.”

Dwyane Wade missed his fourth consecutive game with a strained left hamstring. The Heat are 5-3 when Wade plays this season, 1/3 when he doesn’t.

“Not a whole lot to say,” Heat coach Erik Spoelstra said. “That was a blitz in that first quarter. They absolutely knocked us on our heels and we just could never gain our footing after that.”

It was over early. Miami held Los Angeles scoreless on the Clippers’ first possession, which ordinarily would be in no way notable in an NBA game. Not in this case — considering the Clippers would score each of the next 11 times they had the basketball, running out to a 34-11 lead and never letting Miami make it a game again. . The Clippers had 39 points with 30 seconds left in the first quarter; the Heat didn’t cross the 39-point threshold until 30 seconds remained in the second quarter.

Jamal Crawford had nine assists and J.J. Redick scored 14 points for the Clippers, who shot 56 percent — and that was after the percentage plummeted once Rivers emptied his bench for good midway through the fourth quarter.

Mario Chalmers and Luol Deng each scored 13 for Miami.

Clippers: This marked the 15th time that the Clippers had played at Orlando and at Miami on back-to-back nights — and the first time they won both of those games. … Here’s a balanced first half: The Clippers had seven dunks and seven 3-pointers in the first 24 minutes. … It was Paul’s seventh double-double of the season.

Heat: Miami missed its first 11 3-point attempts. … Shannon Brown started the second half after Norris Cole dislocated a finger on his left (non-shooting) hand midway through the second quarter. Cole will be reevaluated Friday. … It was the 22nd time Bosh scored at least 28 points in a Heat uniform. Miami is 18-4 in those games. … Miami had 11 assists, the Clippers 31.

The Clippers’ starting five shot a combined 35 of 54 in the game, or 65 percent. That was the second-best shooting performance by a starting unit so far this season; New Orleans’ starters made 74 percent of their shots against Minnesota on Nov. 14.

Clippers: At Memphis on Sunday.

Heat: At Orlando on Saturday.