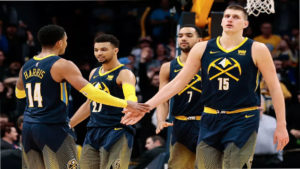 It was just after 3 p.m. Saturday when the Clippers began reviewing their Game 5 loss to Denver the previous night. Coach Doc Rivers warned the film session could run longer than usual.

“If I had clipped every clip our coaches wanted me to clip, we would’ve gone straight to the game tomorrow,” Rivers said.

Almost 90 minutes later, film review ended. Its duration was a reminder of all the reasons why this Western Conference semifinal playoff series has not.

Some troubling trends were extended during Friday’s 111-105 loss. The Clippers can be their own worst enemy after building a double-digit lead, and the Nuggets, who already overcame one 3-1 series deficit this postseason, have been at their most dangerous when their odds appear bleakest.

“We’re just relaxed and had fun; we have nothing to lose,” Nuggets coach Michael Malone said. “Everybody’s written us off.”

There were stretches Friday when that group seemingly included the Clippers, who stopped cutting hard, defending and rebounding the way they can, forward Marcus Morris Sr. said.

“We should have put that game away,” Morris said. “We should have stuck to what we were doing, and that’s been one of our Achilles’ heels, just kind of messing with the game when we get up. To get to where we’re trying to get to, and that’s being champions, we have to be better. That has nothing to do with coaching. That’s on the players. We’ve talked a lot that we have to be better.

“Our goal is to win a championship. With good teams, once we’ve got them up, we’ve got to put them away.”

Players didn’t need a film session to know what happened. Having lost six times this season when leading by 15 or more points, according to ESPN Stats and Information — including a first-round loss to Dallas when leading by 21 — the Clippers know what slippage looks like. Players discussed Friday’s mistakes immediately after the game, Morris said.

“We just lean on us being as good as we are on paper and not actually just finishing the game,” he said. “You know, it’s only happened twice, so it’s no overreaction.”

Rivers first saw signs of undisciplined play before halftime when Denver scored the final four points of the second quarter, and it carried over to the second half. Nuggets forward Paul Millsap, mostly an offensive afterthought, scored 14 of his 17 points in the third quarter. Denver shot 61% in the fourth quarter.

“We wouldn’t allow ourselves to be great yesterday,” Rivers said.

Role players were critical for Denver. After a dust-up with Morris in the second quarter that Malone said invigorated the Nuggets, Millsap came to life. Michael Porter Jr.’s clutch three-pointer and block in the final two minutes preserved the victory.

After scoring a league-high 50.3 points per game during the regular season, the Clippers’ bench has averaged 19 fewer points in this series. The decline can be attributed partly to a tightened rotation. In the last two games, guard Reggie Jackson has played just one minute to make way for Patrick Beverley, whose minutes gradually increased amid his recovery from a calf injury. Beverley’s 27 minutes Friday were five more than his suggested limit, Rivers said, but the Clippers ideally would play him even more.

The drop-off in production from star reserves Lou Williams and Montrezl Harrell continues to play a significant role.

During the regular season Williams, a three-time sixth man of the year, and Harrell, this year’s winner, became the first duo since 1971, when the NBA began designating starters, to each average at least 17 points off the bench. In the playoffs, Williams is averaging 13.2 points on 22% three-point shooting. Harrell is averaging 10.1 points and three rebounds while the infusion of energy that is his trademark hasn’t translated to stops defensively.

Of the 38 shots Harrell has defended in this series, Denver has made 22 of them. Denver center Nikola Jokic has shot 71% — 10 for 14, including three for three in Game 5 — when defended by the 6-foot-7 Harrell. Because Rivers already extended the minutes he typically plays 7-foot starting center Ivica Zubac, who has held Jokic to 46% shooting (23 for 49), a stopgap measure when Zubac sits could be matching up Jokic more often against JaMychal Green, whom Rivers lauded for his physicality against Jokic earlier in the series.

Harrell “has just been up and down,” Rivers said. “Jokic is tough with Zu, Jokic is tough for Trez. He’s just a hell of a player. I’m not going to put a lot of stock into that.”

Said Jokic: “Zubac is kind of bigger and taller, he’s covering the space really good. I cannot shoot over him that easy. And Harrell is a strong guy who is always into my body, so they’re kind of completely different.”

Completely different is how the Clippers would describe the manner in which they aim to close out Game 6 on Sunday and the series.

“We kind of got the lead and then we start changing our coverages, doing our own thing” during Game 5, Rivers said. “Of all the teams left in the bubble, this is the team that will hurt you the most when you do that. And we have great evidence to show our guys.”