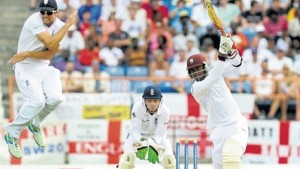 England’s captain Alistair Cook (left) leaps out of the way of a Marlon Samuels drive on the first day of the second Test between West Indies and England at the National Cricket Stadium, yesterday. (PHOTO: WICB MEDIA/RANDY BROOKS)

ST GEORGE’S, Grenada (AFP) — Marlon Samuels averted a complete West Indies batting collapse with a classy, unbeaten 94 to lift the home side to 188 for five at stumps on a rain-affected first day of the second Test against England at the National Cricket Stadium in Grenada yesterday.

Playing the 100th Test innings of a career spanning more than 14 years, the elegant 34-year-old right-hander dominated a protracted final session to the extent that his unbroken 59-run sixth-wicket partnership with Denesh Ramdin has seen the captain contributing just six runs.

Samuels, who came to the crease before lunch with the West Indies unsteady after two early setbacks, never looked troubled throughout his time in the middle and maintained his excellent record against the English with an innings that was watchful for the most part before he launched into a series of extravagant strokes on Ramdin’s arrival at the wicket.

He averaged 69.00 in six previous Tests against England.

Most of his 13 boundaries of 186 deliveries came during that period, which followed the dismissal of Jermaine Blackwood for 26 that reduced the hosts to 129 for five after tea.

Initially ruled “not out” by standing umpire Steve Davis to a concerted leg before appeal by Chris Jordan, the first Test centurion headed back to the pavilion when England’s challenge of the decision showed, via television replays, that the delivery would have hit leg-stump.

That reversal of the on-field verdict broke a 55-run fifth-wicket stand between the two Jamaicans and earned Jordan his second wicket.

The seamer had earlier removed local hero Devon Smith, the opening batsman being adjudged caught at the wicket after James Anderson produced a huge inswinger to bowl the other opener, Kraigg Brathwaite, comprehensively in the third over of the day.

Stuart Broad and Ben Stokes joined in the list of wicket-takers in continuing overcast conditions after lunch, capitalising on poor shots by Darren Bravo and Shivnarine Chanderpaul.

Bravo’s vulnerability outside the off-stump was reinforced after a watchful innings of 35 off 81 balls ended when he wafted unconvincingly at a delivery from Broad for England captain Alastair Cook to take the comfortable catch at first slip.

Chanderpaul, another left-hander but with considerably more international experience, made a gift of his wicket via a catch to Moeen Ali at backward-point off Stokes.

Despite scoring a typically painstaking 46 on the last day of the first Test in Antigua, the 40-year-old’s dismissal for just one will fuel speculation as to whether or not he should bow out of the game at the highest level following this series or the subsequent two-match rubber at home to Australia in June.

A succession of light showers had delayed the start of the match to almost midday and the regular fall of wickets through the first two sessions justified Cook’s decision to put the West Indies in to bat.

Ali, who missed the drawn first Test in Antigua while completing his recovery from an injury sustained during the World Cup in Australia and New Zealand, came into the England final 11 as a replacement for fellow off-spinner James Tredwell, who strained his bowling arm attempting a diving return catch in the final minutes of play in Antigua last Friday.

However, his bowling lacked effectiveness, forcing Cook to rely heavily on his seamers to work through the opponents’ batting line-up.