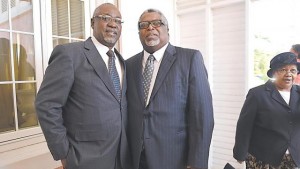 Chief Justice Sir Hartman Longley says it is “fair” to say that thousands of people who were charged with criminal offences in the Magistrate’s Courts are roaming the country free and have very little chance of ever being brought to trial.

“The police are not executing the warrants and the bails are not being enforced. The administration of justice is being abused with impunity,” the Chief Justice said as he addressed the opening of the new law term recently.

He said this “abuse” needs to be addressed as a matter of urgency because it gives rise to serious concerns.

“What is happening is that a trial comes on in the Magistrates’ Court; after taking the evidence of maybe one or two witnesses the matter is adjourned sometimes repeatedly before it gets back on for trial. By then the Defendant and sometime the virtual complainant have all lost interest.

“The Defendant fails to show and a warrant is issued for his arrest. The trial goes cold. It is adjourned sine die or to a date while the Magistrate awaits the execution of the warrant of arrest assuming the warrant has been typed. In some cases Magistrates have not had the warrants typed. In one court there was almost 6000 un-typed traffic warrants.”

Sir Hartman said there were several hundred criminal matters and several thousand traffic warrants “just in the last five years” adding “imagine the impact of that.

“I am told that the vast majority of these warrants are never executed. I had a cursory look at one list and saw a name of a person who had been walking around town with impunity.”

The Chief Justice called for “reform” in this regard and suggested a “much more effective” warrant execution unit of the Police Force to conduct arrests and announced his intention to meet with the Commissioner of Police in the coming weeks to address the matter.

“We also need to reform the way trials are conducted. A trial should not be put off because a defendant absconds. The trial should continue in his absence and so when he is arrested a warrant for commitment is issued if he has been found guilty. Imagine an arrest taking place three or four years later. How would the trial then proceed?

The Chief Justice urged magistrates to examine these situations carefully and to proceed in the absence of defendants where appropriate.

Moreover, he suggested a revision of bail surety provisions to ensure greater accountability of suretors and make certain they are called upon in a “timely” manner to answer for the absence or non-appearance of defendants.

“This is not a state of affairs that we can allow to continue. No doubt it is going to take substantial resources to deal with this problem including the detailing of a more effective unit of an already burdened Police Force dedicated to bringing in these defendants,” he added.