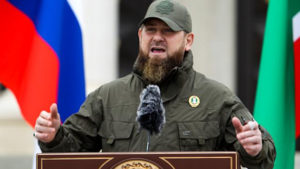 Speaking in a video that was posted to social media on Wednesday, the warlord warned that Poland had “better take back” the weapons it supplied to its neighbor.

“The issue of Ukraine is closed,” said Kadyrov, via a translation from a BBC reporter. “I’m interested in Poland. Poland, what is it trying to achieve?”

He added: “After Ukraine, if we’re given the command, in six seconds we’ll show you what we’re capable of. You should better take back your weapons and your mercenaries and beg official forgiveness for what you did to our ambassador.”

The ambassador Kadyrov is seemingly referring to is Sergey Andreev, Russia’s ambassador to Poland, who was doused in red paint while visiting the Soviet Military Cemetery in Warsaw earlier this month.

Poland has been one of Ukraine’s strongest supporters since the Kremlin-led invasion began on Feb. 24.

“To date, Poland has transferred to our eastern neighbor military equipment worth about 7 billion zlotys, or $1.6 billion,” Polish Prime Minister Mateusz Morawiecki said during a meeting in Krakow last month. “This equipment saves the national sovereignty of Ukraine, Poland and Europe.”

In the last three months, Poland has supplied the Ukrainian army with antitank missiles, unmanned aerial vehicles and antiaircraft missiles.

In March, Kadyrov announced that he was in Ukraine to support Putin’s war — even claiming that he had made it to the frontline in Kyiv — but this may have been fictitious. It was his apparent presence in Ukraine that led experts to believe that a new phase of the war had begun.

Michael Weiss, an expert on Russia, previously told Yahoo News that Kadyrov might have been involved in human rights abuses. “Kadyrov is a psychopath who personally tortures his political prisoners,” Weiss said.

More recently, a number of human rights organizations have alleged that Chechnya had been kidnapping citizens and forcing them to fight as “volunteers” in the invasion. 1Adat, a human rights group that speaks out against propaganda from Chechnya and Russia, claimed that civilians had been taken in “mass abductions.”

“The abducted are required to sign a paper stating that they are volunteers to be sent to Ukraine, otherwise they are threatened with the fabrication of criminal cases,” 1Adat wrote. “Everyone who goes to Ukraine in this way will be used on the front line, like cannon fodder.”