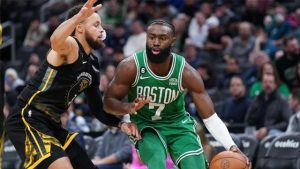 Despite being down three starters, the Boston Celtics still found a way to finish off the Toronto Raptors for their ninth straight victory.

Jayson Tatum was ruled out ahead of the matchup due to left wrist soreness after playing 48 minutes in the C’s thrilling overtime win over the Golden State Warriors. Boston became even more shorthanded during Saturday’s game in Toronto.

Both Marcus Smart and Robert Williams were ruled out for the second half due to injuries. Smart suffered a right ankle sprain and Williams hyperextended the same knee he underwent surgery on before the season.

Jaylen Brown did his part with a team-high 27 points in the 106-104 win. The Celtics bench, however, was the difference-maker as Grant Williams (25 points), Malcolm Brogdon (23 points) and Payton Pritchard (12 points) stepped up to seal Boston’s ninth consecutive victory.

Next up is a trip to Orlando for a Monday night showdown with the Magic. Here are our takeaways from the C’s nail-biter win over Toronto, which brings them to 35-12 on the season.

A pair of injury scares
The first half went about as poorly as it could have for the Celtics. In addition to trailing Toronto by seven at halftime, Boston lost two of its most important players to injury.

Marcus Smart suffered a right ankle sprain in the second quarter and was ruled out for the remainder of the game. He didn’t put any weight on his right leg as he was helped off the floor by Celtics trainers.

Williams was ruled out as well after tweaking his surgically-repaired left knee on a collision with Jaylen Brown. He played 10 more minutes after the injury, so sitting him for the second half seemed like a precautionary measure.

After the game, Celtics interim coach Joe Mazzulla said Williams’ knee hyperextension was nothing serious and Smart is considered day-to-day with his X-rays being negative. That’s the best news C’s fans could have hoped for.

Williams and Smart’s statuses will be worth monitoring heading into Monday’s game in Orlando, though it’s hard to imagine either of them playing.

Role players step up
With no Tatum, Smart, or Williams, it was up to the Celtics’ role players to step up alongside Jaylen Brown. Sure enough, Boston’s impressive depth was on display.

Grant Williams was the catalyst with 18 points in the first half, 16 of them coming in the second quarter. His career-high for points in a game was 20.

Malcolm Brogdon stayed red-hot with yet another big night, which was even more crucial in Smart’s absence. Brogdon added 23 points (8-16 FG, 3-5 3PT) and seven rebounds to continue his torrid stretch.

Brogdon has now scored at least 15 points in eight of his last 10 games.

Also stepping up with Smart out was Payton Pritchard, whose 26 minutes marked his second-highest total of the season. He made the most of his opportunity with an enormous fourth quarter that included four 3-pointers, including two go-ahead shots.

Pritchard also came up with a huge offensive rebound with the Celtics up two with less than a minute to go. He finished with 12 of the C’s second unit’s 62 points.

Al Horford comes up clutch
This was not Horford’s night offensively. The veteran big man couldn’t get his shots to fall as he tallied only five points while shooting 2-of-10 from the floor (1-of-6 from 3).

That didn’t matter. When it was crunch time, Horford got the job done.

Horford sealed Boston’s hard-fought win with an incredible defensive stretch with the game on the line late. He capped it off with the steal to spoil Toronto’s chances as time expired.

Smart may have been out, but it was Horford and the supporting cast stepping up to make winning plays.